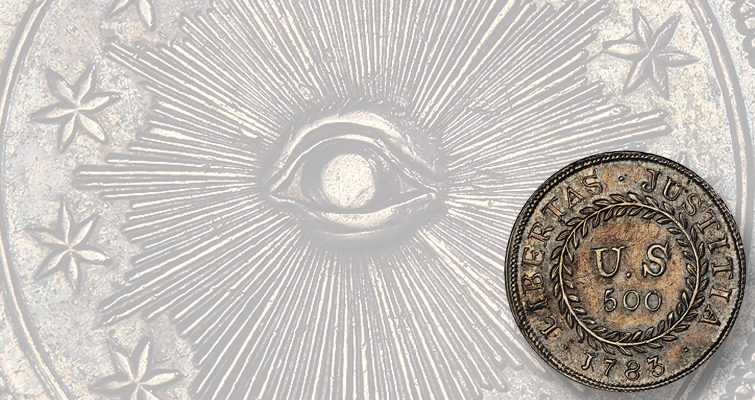 Numismatist David McCarthy’s research concludes that the 1783 Nova Constellatio, Plain Obverse quint is the first U.S. coin struck under the authority of the U.S. government. 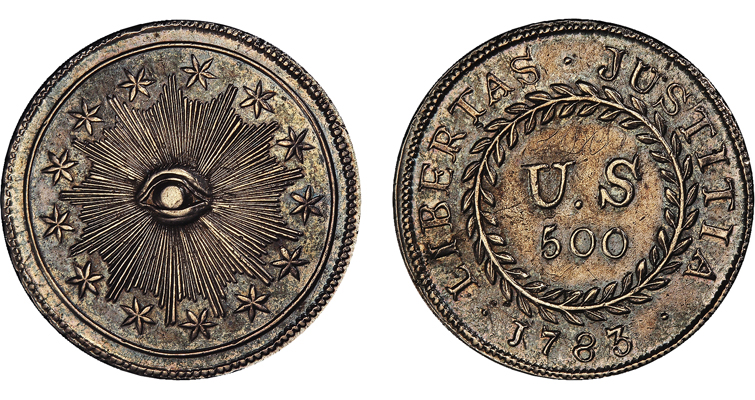 Authorized by Congress, the unique 1783 Nova Constellatio, Plain Obverse silver quint pattern had a value of 500 units in a proposed, but later abandoned, early American decimal monetary system that would have ranged from 5 to 1,000 units.

Attributed as Breen 1102 in Walter Breen’s Complete Encyclopedia of U.S. and Colonial Coins, the pattern is known by a single example.

The pattern, graded and encapsulated Professional Coin Grading Service Secure About Uncirculated 53, was scheduled to be on exhibit at Kagin’s booth #700 Aug. 1 to 5 on the bourse floor of the American Numismatic Association World’s Fair of Money at the Colorado Convention Center in Denver.

Insured for $5 million, the pattern is considered to be the historic ancestor of the dollar as well as every coin in the Western world using a decimal monetary system.

“This was the first use of the vital and enduring decimal system to be established in the Western world,” stated Donald H. Kagin from Kagin’s.

Soon after, McCarthy began researching it through the writings of Morris and Thomas Jefferson, Continental Congress documents, and forensic evidence found on the coins themselves, and he consulted with other noted experts in early American numismatics.

Results of McCarthy’s research on the unique, early American experimental silver coin, which once was in the hands of one of the nation’s Founding Fathers and first Treasury secretary, Alexander Hamilton, will be published in the August 2017 edition of The Numismatist, the official journal of the American Numismatic Association.

“Although the coin was discovered in 1870, it was misattributed,” explains McCarthy. “We now have compelling evidence that it is, ‘the first that has been struck as an American coin,’ as described in the April 2, 1783 diary entry of Robert Morris, a signer of the Declaration of Independence and the U.S. government’s first Superintendent of Finance.

“The Quint and a subsequent set of coins were created in Philadelphia in April of 1783 under authority of the Treasury some nine years before the next coins would be struck by the U.S. government. It would have been valued at 500-units in a proposed system that would range from 5 to 1,000 units,” McCarthy said.

Only two examples of the 500-unit coin are known, and each is distinctively different on the obverse.

One has the words, NOVA CONSTELLATIO, Latin for “a new constellation,” while the other example, the Plain Obverse piece, is absent the inscription.

McCarthy’s research demonstrates the coin without the words on the obverse was struck first.

While several states and private individuals produced and issued coins during the 1770s and 1780s, the 1783 Nova Constellatio, Plain Obverse quint is identified as the first coin struck and paid for by the U.S. government.

Before submitting his findings for publication, McCarthy shared his results with a dozen numismatic experts on early American coinage who agreed with his conclusions.

“There is a first United States coin, as we have written evidence (in the April 2, 1783 diary entry of Robert Morris, U.S. Superintendent of Finance) that one was delivered,” according to Dannreuther.

“‘I sent for (metallurgist) Mr. (Benjamin) Dudley who delivered me a Piece of Silver Coin being the first that has been struck as an American Coin,” Morris wrote, according to Dannreuther. “The only coin that logically could be this coin is the Plain Obverse Quint.”

Dannreuther says there is much evidence suggesting the Plain Obverse quint is the first coin struck by the U.S. government, primarily the absence of the inscription NOVA CONSTELLATIO.

“One does not remove legends, they are added,” Dannreuther says.

“Secondly, the number of dies noted in the literature can be made to match only by having one die ground down and reengraved.

“After overlaying the two Quint types, it became obvious that the Plain Obverse die’s eye matched the With Legend eye. Since this is the highest point of the coin, it is the lowest part of the die, as well as the center, it would be logical to leave a small amount of this area as a starting point for the new die. The rest of the die’s detail was removed by the grinding process, of course.”

Engraving of the two quint obverse dies, in Dannreuther’s estimation, was executed by two different engravers.

“Since, we know that the With Legend coins match the other denominations in style, as well as having the ‘Nova Constellatio’ legend, the Plain Obverse has to be the first one — thus, it is the first United States coin,” Dannreuther says.

“As such, the historical importance of his research, and the coin, is one of the most exciting developments in modern numismatics!”

Surfacing in New York City nearly 150 years ago, the Plain Obverse quint pattern was carefully preserved in several major collections, including those of Lorin G. Parmelee, S.H. and H. Chapman and Wayte Raymond, before becoming part of the Garrett Collection and passing into the possession of Johns Hopkins University, where it resided for much of the 20th century.

Chicago numismatist Walter Perschke paid $55,000 to acquire the pattern in Bowers and Ruddy Galleries’ Nov. 28 to 29, 1979, auction of selections from the Garrett Collection.

Perschke held on to the piece until consigning it to Heritage’s 2013 sale.

Only now, though, has numismatic research brought together evidence that it was the first federal coin made by authority of the U.S. government, according to Kagin’s.

“While the 1783 Plain Obverse Nova Constellatio Quint is among the most historically significant of all United States coins, it is also one of the most important artifacts in the world,” says Don Kagin. “Nothing defines a nation and its society more than its coinage. Just like great documents such as The Magna Carta or The Declaration of Independence established fundamental principles and tenets for Western society, so does coinage reflect a nation’s most important ideals, becoming a primary source of communication for a nation’s beliefs.”

“By examining the first coin of the United States and the new decimal monetary system that it ushered in, we gain significant insights to the thinking of America’s Founding Fathers concerning what kind of nation they wished to establish,” Kagin said.

The inscriptions and symbols reflect the most important aspects of our fledgling nation, according to Kagin.

??On the obverse, the Eye of Providence, symbolized the creator’s approval of the new nation.

??A circle of 13 stars — a theme which has endured for 240 years — is an obvious representation of the “new constellation” formed by the original 13 colonies.

??“U.S.” proclaims the name of the country for all the world to acknowledge. This is followed by the denomination — in this case, 500 units or a Quint.

“Along with the date, two of the most fundamental and defining issues for Americans then and today are prominently inscribed in Latin so all nations could understand: LIBERTAS (Liberty) and JUSTITIA (Justice)” according to Kagin.

“This coin, struck in the precious metal silver, was also the very first artifact to present our nation’s new decimal system — in fact, the first use of such a vital and enduring system to be established in the Western world.” 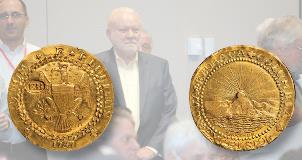 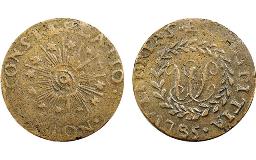 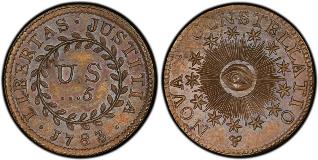