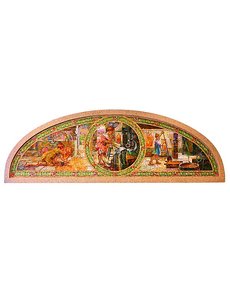 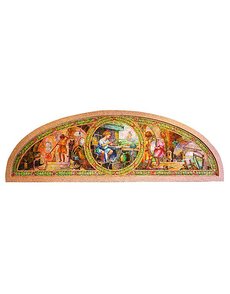 Shown is one of seven Favrile glass mosaic panels that depict ancient coin production methods and are affixed to the walls of the lobby area at the Philadelphia Mint. The mosaics will receive conservation and cleaning, and be enhanced with special lighting to bring out the colors in each glass tile. 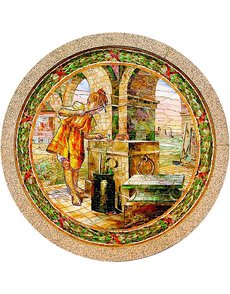 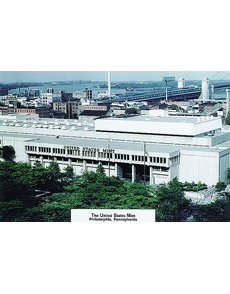 Preparations are on target for the beginning of construction in October of new and revitalized exhibits to enhance the visitors center and tour at the Philadelphia Mint.

The new exhibit areas and displays are to be put in place and unveiled to the public sometime in the spring, according to Tom Jurkowsky, director of the U.S. Mint’s Office of Public Affairs.

Designs for the new interactive, video and static displays, with audio augmentation, are currently being finalized by Quatrefoil, the Laurel, Md., firm contracted by the U.S. Mint under a $3.9 million accord inked on Aug. 18, 2010.

Quatrefoil was selected from among 10 firms that submitted bids under the United States Mint’s request for proposals.

Abbie Chessler, Quatrefoil’s co-founding partner and head of design, said Aug. 4 that the firm has been working closely with the U.S. Mint’s historian, curatorial staff and other Mint personnel on the exhibit design process as well as determining which of the “heritage assets” currently on display will remain and what other items might be substituted.

Areas may be closed to public traffic to accommodate exhibit installation for periods of time, still to be determined, between now and the time the new exhibits are unveiled in 2012, Chessler said. Those closures will likely take place during the slow winter months to minimize public disruption, she said.

No details on exhibited coins

Coin World asked whether any of the 1933 Saint-Gaudens gold $20 double eagles or Proof 2000-W Sacagawea .9999 fine gold dollars currently in nonpublic storage at the Mint’s Fort Knox Gold Bullion Depository in Kentucky would be among the items on display. Jurkowsky said none of those coins are currently scheduled to be on exhibit.

The Mint holds 12 2000-W Sacagawea gold dollars that traveled aboard a July 1999 space shuttle mission and 10 1933 Saint-Gaudens double eagles whose ownership was the focus of a federal jury trial in Philadelphia in July 2011.

Jurkowsky said U.S. Mint officials will determine whether any of the heritage assets currently on display that will not be part of the new exhibits might be exhibited elsewhere.

While the renovated, redesigned and enhanced visitors areas will still include a self-guided tour of the production floor viewed from the third floor, Chessler said the intent is to make the experience more enjoyable for the more than 250,000 people who visit the Philadelphia facility annually. The viewing area is 40 feet above the production floor.

The Philadelphia Mint was closed to public access following the Sept. 11, 2001, terrorist attacks against the United States.

Restricted tours pre-arranged through congressional representatives were gradually phased in within the next two years, with the same day, self-guided tours returned in 2005.

Chessler said all of the glass panels will undergo conservation and cleaning. Special lighting — which the panels currently do not have — will be added to the area to bring out the enhanced brilliance of each glass tile.

Other items currently on public display at the Philadelphia Mint are:

➤ The first coining press, used to strike the nation’s first coins in 1792.

➤ The preserved body of Peter the Mint eagle, a real bald eagle who made the first United States Mint his home. Today’s Mint artists still study Peter when working on new eagle designs.

➤ The gold medal presented to Gen. Anthony Wayne for his capture of Stony Point during the Revolutionary War.

Anyone interested in visiting the current exhibits at the Philadelphia Mint can access the tour information from the link on the U.S. Mint website at http://www.usmint.gov/mint_tours/?action=philadelphia. ■