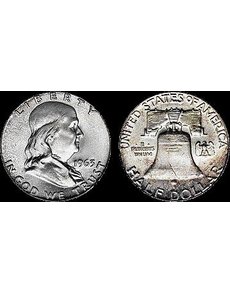 Franklin half dollars were very common in circulation in 1964, but hardly anywhere to be seen by 1966 after their removal from circulation by individuals seeking to sell silver coins for their bullion content.

I continue my commentary on coins in everyday circulation. Last week I ended with the comment that Mint Director Eva Adams blamed coin collectors for the shortage of 1965 and 1966, when speculators and investors rushed to take as many coins from circulation as possible — as a profit could be made by melting them.

Dimes, quarter dollars and half dollars disappeared. Very few of these people had anything to do with numismatics.

Collectors were punished by a halt in production of Proof sets and removal of the Mint marks on Denver issues, making new coins less interesting. Collectors and dealers were furious. Proof sets had been issued continuously since 1950, and now they were gone. Mint-marked varieties were bedrock of the hobby.

Interestingly, after she left office Miss Adams “got religion,” and actually embraced the American Numismatic Association, even getting a seat on the board of governors. To many bystanders, this was simply amazing. Even more amazing was the ANA inducting her into the Hall of Fame. For what numismatic accomplishment?

Miss Adams was a very friendly person. I found her charming, but for many it was hard to reconcile the punitive actions she took earlier. At the ANA banquet on the evening of Aug. 27, 1977, with Miss Adams in attendance, ANA President Grover C. Criswell Jr. lambasted her up one side and down to the other — to the embarrassment of most people attending. Numismatic rogue that she may have been at one time, this excoriation was not considered to be good manners. The ANA Board later sent her an apology.

In the 1960s, coin dealers in particular, but also entrepreneurs setting up shops in motels and the like, did a land office business in buying old silver coins. Sometimes long lines formed as people waited their turn, holding coins, silverware, jewelry and other items made of this metal.

If you had gone to any major convention in the late 1960s there would not be a moment of silence, as there would be a constant ringing of coin counters across the bourse, nonstop from the opening to the close.

In the meantime, it was illegal for Americans to hold gold bullion or any modern gold coins struck since 1933, with a few scattered exceptions for foreign Proof coins. There arose a great business in buying and selling gold $20 double eagles in quantity for those who wanted to own gold.

A nice double eagle of a common date and Mint could be bought for less than $60. Imagine that!