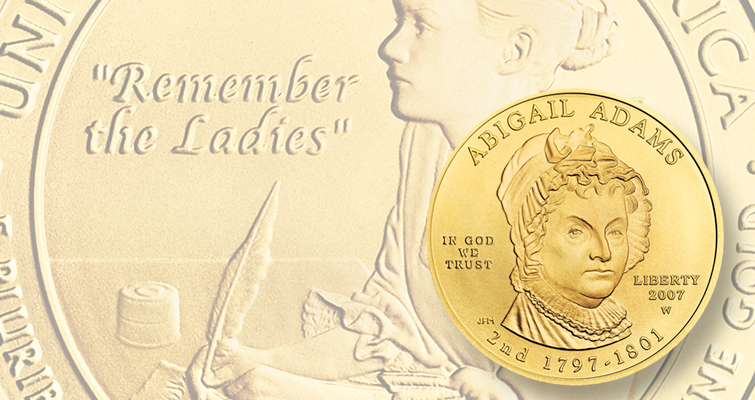 Abigail Adams advised her husband to "remember the ladies" when considering the consumer economy in early America. 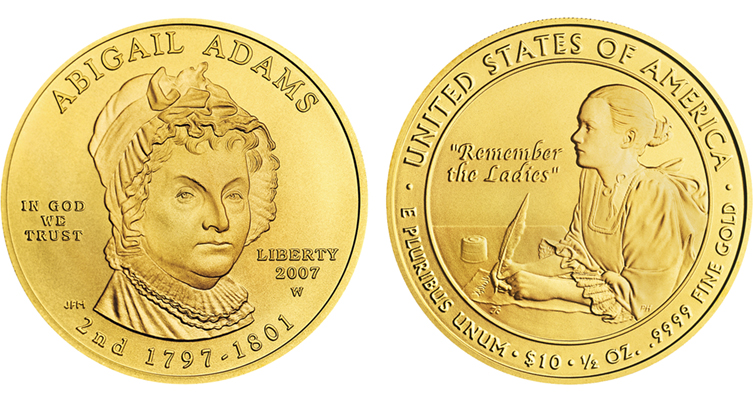 First lady Abigail Adams is recognized on a 2007 First Spouse gold $10 coin, the second issue to be released in the First Spouse coin series.

Close your eyes and imagine a coin that circulated in pre-Federal America. Now picture the coins in the hands of a person preparing to spend it. Perhaps they bought a dozen fresh eggs, or candles to light their house, or a ream of writing paper, handing over a coin we now collect in an everyday transaction.

Imagine that person’s face: it’s a man, isn’t it?

While we have all wondered who spent our cherished coins, most modern numismatists have not paused to contemplate the role that Founding Mothers played in the early American economy.

Women in 18th century America were the chief actors in every household economy. Their responsibility for education of children and provisioning of the home forced them to engage in the sorts of transactions that required using the small change we now collect.

Abigail Adams, the wife of John Adams, left a treasure trove of letters that covered every aspect of her family life. Most are now preserved by the Massachusetts Historical Society and are available online at the society’s dedicated Adams Family Papers website, http://www.masshist.org/digitaladams/archive/.

Writing to her husband, John, on Dec. 10, 1775, from the family home outside of Boston, Abigail described the then-prevailing currency situation with savvy.

She advised her husband, then at the Continental Congress, to find a legislative remedy “to keep among us our gold and silver, which are now every day shipped off to the West Indies for molasses, coffee, and sugar.”

“I can say of my own knowledge,” Abigail wrote, “that a dollar in silver is now become a great rarity, and our traders will give you a hundred pounds of paper for ninety of silver.”

In January 1779, Mrs. Adams wrote a long letter to her “dearest friend” John on financial matters.

Still away at Congress, John had directed his wife to draw bills of exchange, a financial document similar to a check, to cover household expenses. While merchants were happy to extend her credit, “not a single six pence can I get of substantial coin,” Mrs. Adams complained. Wartime prices were high, and necessaries were scarce, forcing Mrs. Adams and women across the country to think like financiers.

Early American merchants and tradespeople tended to be men, but when thinking about the consumer economy, recall Abigail Adams’ words of caution to her husband in 1776: “remember the ladies.”