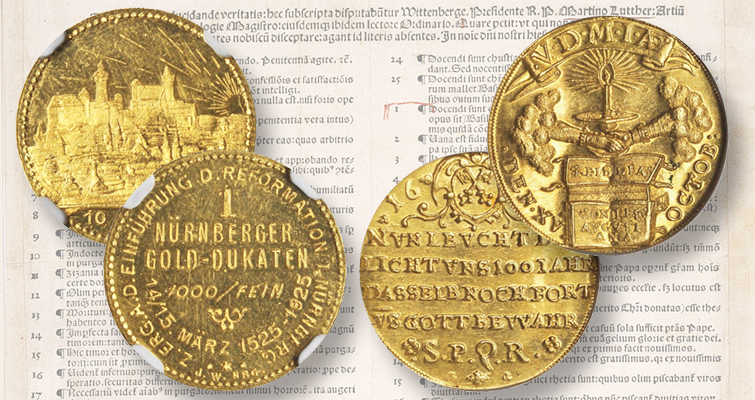 Items offered in Stack’s Bowers Galleries’ Aug. 21 auction celebrate the Reformation. The 1925 gold ducat medal, far left, honors the 400th anniversary of the Reformation in Nurnberg, and the 1642 gold 2-ducat coin, right, marks the centennial of reforms in Regensburg.

A pair of gold items, one coin and one medal, celebrating disparate anniversaries of the Protestant Reformation are on offer during Stack’s Bowers Galleries’ Aug. 21 auction.

The coin of note is a 1642 gold 2-ducat piece from the free state of Regensburg, marking the centennial of the Reformation, the auction house said.

The medallic issue, from 1925, is the size of a gold ducat and honors the 400th anniversary of the Reformation in Nurnberg, according to the auction house.

The different dates reflect the movement’s various successes in receiving recognition in different parts of the Holy Roman Empire.

The obverse of the 1642 coin shows a civilly dressed arm and a military clad arm extending from separate clouds, hands clasped in a handshake, above them a candle and below them a Bible, the Augsburg Confession, and the Oct. 15 date. An inscription abbreviating Verbum Dei Manet in Aeternam, which translates to “The Word of God Endures in Eternity,” appears on the documents.

The reverse depicts a coat of arms above a five-line inscription that translates to “100 years of revealing light, Senate and People of Regensburg.”

This is the second example of the coin the auction house has ever offered, it said. Graded Mint State 63 by Numismatic Guaranty Corp., it has an estimate of $3,500.

The 20th century medallic ducat (equivalent to 10 marks) was designed by Josef Wild.

It shows the sun rising over a city view, with the denomination indicated below. The reverse bears inscriptions indicating its fineness, the anniversary and other attributes.

NGC has graded this example MS-63 also, and it has an estimate of $2,500. Stacks says it is one of just four examples offered at auction in about 15 years. 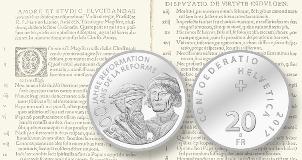 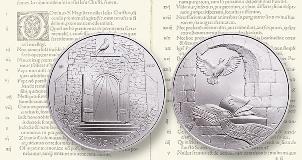