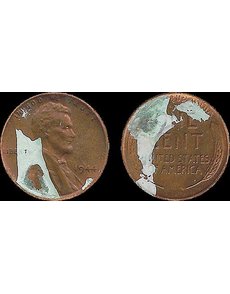 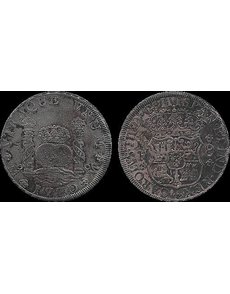 When I bought my house 30 years ago, every room except the attic was painted a sickly green. The attic was green, too, only sicklier. Over the years, every surface was repainted, except the upstairs hall closet.

From the youngest child’s birth to the oldest granddaughter’s senior year in high school, the putrid color endured on the walls behind the sheets and towels and even on the 10-foot ceiling above them.

Last fall, I set out to paint over the last bit of hideousness. I cleared out the closet, probably for the first time, and made two numismatic discoveries.

Hidden deep on the top shelf — behind an accumulation of worthless items once deemed too valuable to discard — was a long-lost, 1780 Mexico City 8-real coin. On the floor of the closet, in its darkest recess, was a 1944 Lincoln cent dabbed with green paint.

I’d been looking for that 8-real piece for years. Some time in the 1980s, I hid it in a really good spot for what was supposed to be just a couple weeks. The coin hadn’t made it to the safe deposit box and needed a secure place while we were on vacation

The only trouble was, when I returned home, I couldn’t remember where I hid it.

Over the years, I told the children that pirate treasure was hidden in the house, but they never found it. When removing the shelves to paint the closet, I found it, still in its original Kraft envelope, on the top shelf’s support.

When I hid the coin, I’m certain it was Uncirculated. A quarter century or so in the closet saw it mysteriously wear to Extremely Fine, probably the work of the same ghosts who make the home’s century-old floorboards creak at night.

The 1944 Lincoln cent solved a mystery, too. My wife and I bought the 1914-built home from the estate of an elderly couple.

Many things were original to the home when we bought it in 1984, including hazardous knob-and-tube wiring in the attic and an oddly-shaped pre-World War II, Mazda-brand lightbulb in the basement.

We wondered if the green paint dated to the home’s construction. The cent answered the question. The house was painted sickly green after 1944. The cent had seen circulation, but showed traces of luster in protected areas. I’m guessing the paint was applied about 1950.

The 8-real coin is now safely stored at the bank. The cent, though, is in my desk. I pull it out now and then when I tell visitors about the money I found hidden in the house.

In its place in the closet I placed a 2013 cent with a dab of white paint on it.