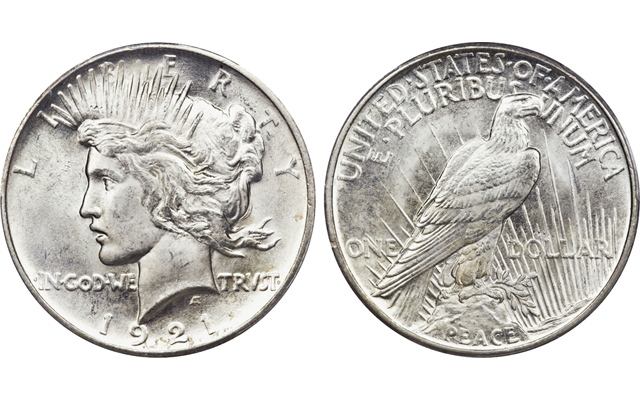 A collection representative of World War I could be considered incomplete without an example of the 1921 Peace dollar.

The following is the final segment from Paul Gilkes' cover feature in the November Monthly issue of Coin World, dealing with World War I and the many numismatic collectibles that are related to that war.

In the years following the close of World War I, everlasting peace seemed a desirable and, to some, a possibly attainable ideal.

President Woodrow Wilson’s Fourteen Points became the basis for the terms of Germany’s surrender, and soon after, Wilson fought for and secured a League of Nations.

Wilson’s Fourteen Points speech delivered Jan. 18, 1918, proclaimed that World War I was being fought for moral causes and called for steps to establish postwar peace in Europe.

In 1919, months after the Armistice was signed, the American Federation of Arts called for a coin to commemorate the World War I victory.

Farran Zerbe addressed the subject during the American Numismatic Association convention in Chicago in 1920. Legislation was introduced May 9, 1921, in Congress providing for a silver dollar “of an appropriate design commemorative of the termination of the war between the Imperial German Government and the government and people of the United States.” The legislation did not advance, and was unnecessary in any case, since Treasury officials already had authority to redesign the silver dollar. By the end of December 1921, a design for the Peace dollar had been prepared by sculptor Anthony De Francisci and a small number of coins struck.

A collection representative of World War I could be considered incomplete without an example of the 1921 Peace dollar. Price vary considerably based on grade and grading service, if certified.

But the everlasting peace that Wilson sought and for which the Peace dollar was a symbol would last no more than two decades before a second world war would break out.

And the entire world would be in thick of it, again.