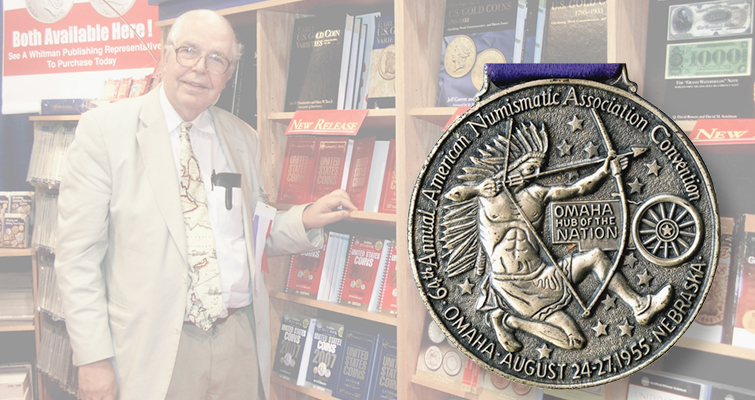 Professional numismatist Q. David Bowers attended his first ANA convention in 1955 in Omaha as a dealer at age 16. Illustrated is his convention medal superimposed over a photo showing hims at the Whitman Publishing booth at the 2006 World's Fair of Money in 2006. 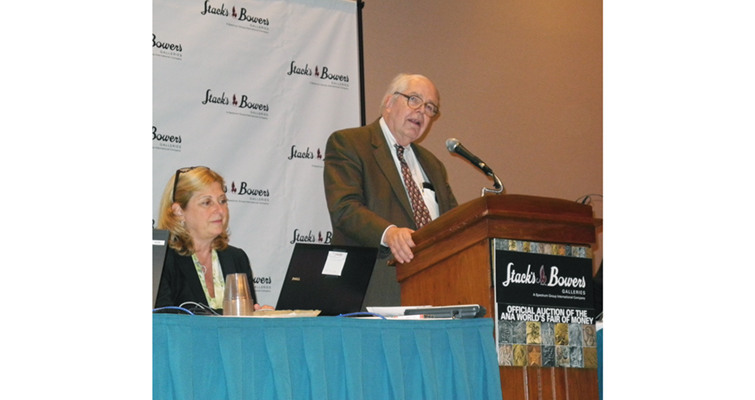 The Joys of Collecting column from the Aug. 1, 2016, Monthy issue of Coin World:

The summer of 2016 could have been my 64th anniversary as a member of the American Numismatic Association.

It will not be, because in the summer of 1952 when I discovered the world’s greatest hobby, I was only 13 years old. To be a member you had to be 18. Young numismatists were not wanted.

This caused a problem when in 1955 I desired to have a bourse table at the annual ANA convention, held that year in Omaha, Neb.

Lewis M. Reagan, general secretary, was “the” ANA. He made decisions, awarded contracts, arranged with hotels, and was in charge of the bourse. If I would have my father send a written guarantee that he would stand behind my business at the show, and if I could send other recommendations, I might be allowed.

My father did that, and Lee F. Hewitt, publisher of The Numismatic Scrapbook Magazine, wrote to endorse me — as during my course of being an advertiser he never received a complaint.

For a number of years I gave my popular “All About Coins” Summer Seminar course, where I came to realize that Young Numismatists (by then allowed to be members) were always the brightest and the best in the class.

In 1991 I contributed the narrative for the three-volume Centennial History of the American Numismatic Association.

When the American Numismatic Association Certification Service was launched to study coins for authenticity (later it added grading), I was a consultant. I wrote the introduction to The Official ANA Grading Standards for United States Coins (Ken Bressett and Abe Kosoff did the coin descriptions).

Some years ago I worked with the family of Harry W. Bass Jr. to arrange the splendid loan exhibit of the Bass Collection, today a prime attraction at ANA headquarters.

All of the above has been a two-way street. The ANA has made my numismatic life much fuller and more enjoyable than I could have ever imagined in the 1950s.

Today, the association has more services, programs, and other features than ever before. I cannot imagine how anyone could participate in collecting coins, tokens, medals, or paper money without being a member. It can add a lot to your life.

At the same time, I realize that many newcomers to what is now called an industry, become interested for what I consider to be the wrong reason: speculative and investment profits.

Often, indeed, these are illusory unless another kind of investment is made: study.

Study takes time. The easiest way to start is to buy a half dozen books on coins — about their history, not about investment.

For starters, I recommend A Guide Book of United States Coins. When I was a kid I read it cover-to-cover, not once but several times. In time, I became very knowledgeable as to its content.

I have two recommendations to insure your future success in our hobby/industry. Join the ANA with a “Platinum” membership so you will receive hard copies of The Numismatist, a wonderful magazine.

Give yourself a budget of $200 and buy a group of books I suggest.

Perhaps include the 100 Greatest series published by Whitman.

Do this, and I expect you will multiply your enjoyment of numismatics and will still be a reader of this column years from now!

In the meantime, track me down at one or another of the many ANA events, such as the upcoming show in August. 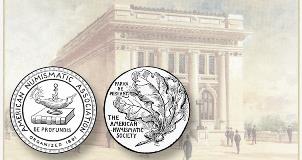