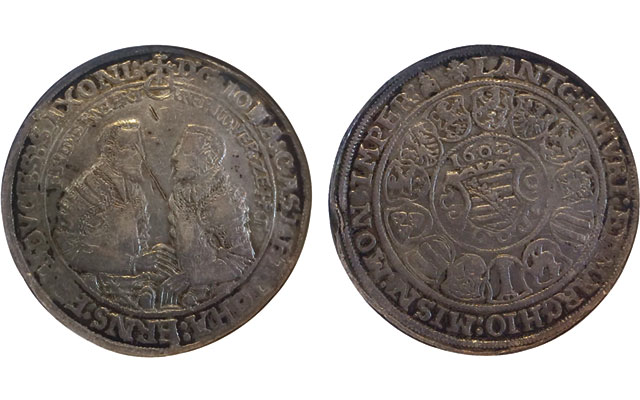 This previously unpublished 1602 silver 2-taler coin from the German state of Saxe-Old-Gotha was found in an estate in Ohio.

This world coin showed up in an estate in central Ohio. It is a huge chunk of silver, the size of a U.S. silver dollar but twice as thick!

It appears to have once been worn as jewelry.

What is it worth? What do I have?

The reader appears to have a previously unpublished 1602 silver 2-taler coin from what coin references call Saxe-Old-Gotha, one of the many German states with a coinage history prior to the 1871 German Empire unification.

Like many historic European coins, this coin doesn’t carry a denomination, so its weight determines its classification.

Coin World asked Ron Guth, a specialist who operates GermanCoins.com, about the coin. “Am I surprised that this coin exists? No. The existence of a 1/4 Thaler, a 1/2 Thaler, and a Thaler from that year increases the possibility that 2 Thalers were also made,” Guth wrote.

“I know of no Thaler collectors who are date/mintmark collectors. Thus, they are most likely to purchase the most common date within the Davenport number because it is the most affordable. ... With rare exception, most of the dates within a Davenport number for coins from the 1600s are priced similarly, even though we can assume there is a wide variance in original mintages and actual rarity,” Guth said.

Multiples-taler denominations were struck with the same dies but on thicker, heavier planchets, so some pieces identified by collectors as a 1 taler (because that’s the only listing for the date) could actually be 2 talers. A 1-taler coin should weigh 28 to 29 grams, and a 2-taler piece of the same era and issuer should be double that, Guth said.

The collector submitted his coin to Numismatic Guaranty Corp., who confirmed its double-taler weight, grading it Very Fine Details, Mount Removed, Scratched. NGC’s price guide values VF-20 pieces of other 2-taler dates at $5,400, but this coin’s value may be less due to damage.