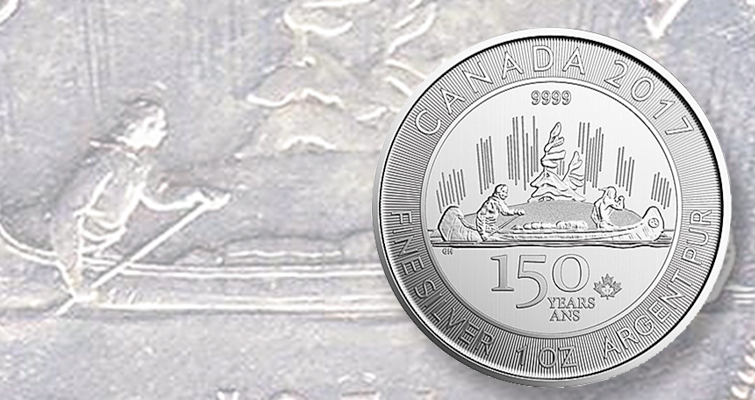 Canada’s newest limited-mintage silver bullion coin commemorates the 150th anniversary of Canadian Confederation, and features a modern update of the Voyageur design that first appeared in 1935. 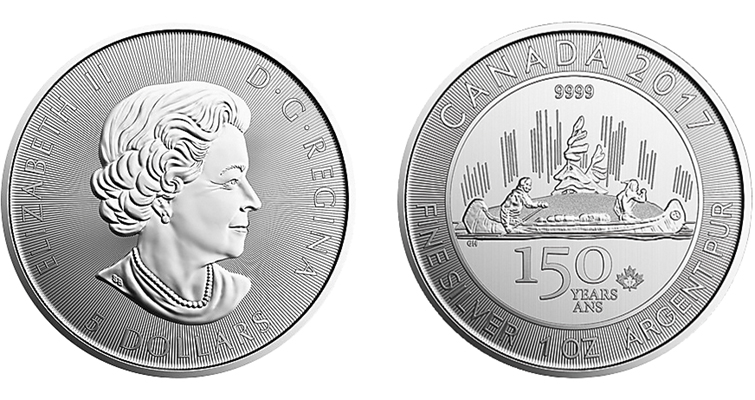 Canada’s newest limited-mintage silver bullion coin commemorates the 150th anniversary of Canadian Confederation, and features a modern update of the Voyageur design that first appeared in 1935.

A classic Canadian dollar design has been revived for a silver bullion coin.

The Royal Canadian Mint’s newest limited mintage 1-ounce silver bullion coin depicts a largely unchanged version of the Voyageur dollar design that began appearing in circulation on a silver dollar in 1935. The 2017 coin commemorates the 150th anniversary of Canadian Confederation.

The .9999 fine silver $5 coin shows the design of the voyageur (a French Canadian fur trapper) with native in a canoe, the design from the 1935 coin issued to honor King George V’s Silver Jubilee (25th anniversary).

Very similar to the design that appeared on Canadian silver dollars from 1935 to 1986, the Voyageur image by sculptor and artist Emanuel Hahn is a powerful nod to Canada’s early history and its reputation as an untamed frontier during the fur trade era.

Centered on the coin’s reverse, a canoe moves swiftly past windswept pines that dot a semicircular island. A voyageur paddles in the stern, while a First Nations member paddles at the bow; between them, a bundle of wrapped furs is marked “HB” for Hudson’s Bay Company, while vertical rays above represent the aurora borealis lighting up the sky.

The reverse also features a visible micro-engraved security maple leaf featuring “17” in the center of the leaf.

The obverse features Susanna Blunt’s design of Queen Elizabeth II, with the $5 face value and the year 2017.

At press time, distributors are offering the coin for about $3.50 to $5 above the precious metal “spot” price, depending on quantity purchased and payment method.