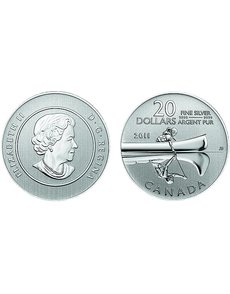 Canada has announced its second silver $20 coin offered at face value to collectors, but this time those in the United States (and nine other countries outside Canada) can order them through the Royal Canadian Mint.

The release of a new commemorative coin from Canada is a reflection of collector demand for silver coins at face value from around the world.

The Royal Canadian Mint is continuing a series of .9999 fine silver $20 coins offered to collectors at their face value of $20 that began earlier in 2011, but this time the RCM is making the coin available outside of Canada.

On Oct. 28, the RCM will begin shipping examples of the 2011 Canoe .9999 fine silver $20 coin. The coin is the second issue, following an inaugural coin having a design honoring the Maple Leaf and released on Feb. 28 exclusively to Canadian residents.

The newest design is a creation of Jason Bouwman, and it shows a young person enjoying a recreational outing. The boy breaks from paddling to dip his hand in the water and touch the past — the reflection reveals an early native paddler (or voyageur) in a traditional birch-bark canoe as it also appears on the 1935 and later silver dollars of Canada.

Bouwman said: “The canoe has become as much a part of the Canadian visual lexicon as the Canada goose, the beaver and the maple leaf. ... This concept is both intimate and sentimental and is striking in its unique composition. It tells a story of respecting our ancestry and sharing a love of this land.”

The RCM is counting on collectors around the world to share a similar love for the land. Unlike the first release, when sales were limited to Canadian residents, the RCM will ship the latest example to any of 10 foreign destinations, including the United States. The list also includes Australia, France, Germany, Italy, Japan, Netherlands, Poland, South Korea and the United Kingdom.

To meet the expected demand, the newest edition has a mintage limit of 250,000 coins versus 200,000 for the first release, which the RCM said sold out in 29 days.

The coins contain 7.96 grams of silver (slightly more than a quarter-ounce) and measure 27 millimeters in diameter. Both coins have a Specimen finish.

Though originally planned as $10 coins, the denomination was changed to $20, apparently because of concerns of the rising price of silver, which eventually spiked above $40 an ounce, the point at which the coins would have become potential subjects for the melting pot.

The RCM announced the second coin sometime on or before Sept. 28. As of Sept. 29, some sales and deliveries of the coins had already taken place, based on comments from some buyers at the RCM’s Facebook page, despite press materials indicating that sales would not begin until Oct. 1.

Shipping varies depending on method and delivery time, but the lowest cost option appears to be the FedEx Express Saver service (which takes five to seven business days) for $12.99.

Shipping was to begin Oct. 28, according to sales material provided by the RCM, but its website notes, “The date of shipment will be determined by the volume of orders received, product availability and other factors.”

The U.S. prices for collectors in the United States buying directly from the RCM will fluctuate with the exchange rate, calculated at the time of purchase. ¦