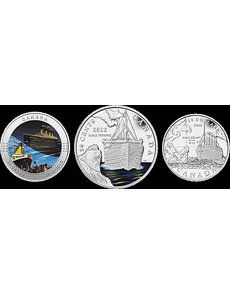 Canada marks the milestone of the Titanic’s horrific sinking off the coast of Newfoundland with three collector coins: a colorful 25-cent coin, top; a colorful silver-plated copper 50-cent coin, middle; and a .9999 fine silver $10 coin, bottom. 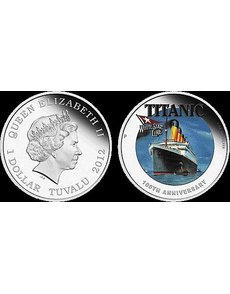 The Perth Mint’s Proof .999 fine silver dollar for Tuvalu recalls poster art from the heyday of transoceanic travel, borrowing from a famous White Star Line promotional print for its design.

The Royal Canadian Mint on March 5 is set to begin selling three new collector coins marking the centennial of the disaster that sunk the ship on its maiden voyage.

Though the RCM would not release information to media before March 3, at least two distributors shared news of the coins at their websites on Feb. 28. The release features a colorful, oversized 25-cent coin, a silver-plated copper 50-cent coin and a .9999 fine silver $10 coin.

In addition, the Perth Mint in Australia on March 2 began selling a single Proof .999 fine silver dollar for Tuvalu commemorating the centennial of the Titanic’s completion.

The story of the tragic sinking of the RMS Titanic over April 14 and 15, 1912, needs no embellishing, for the disaster led to an epic loss of life that ultimately likely could have been avoided.

Had the ship not turned astarboard to avoid the calamitous iceberg, the Titanic would have surely taken a hit, but experts believe it would not have caused enough damage to sink the vessel. The speed of its travel, too, amid dangerous ice, could have been throttled back, had an irritated wireless operator passed along a warning to Capt. Edward Smith.

But Titanic sank just hours after glancing off of an iceberg, several hundred miles off the coast of Newfoundland, Canada. The Titanic will forever be linked to Canada because several Halifax-based ships were enlisted in the recovery efforts, and 150 victims were buried in three cemeteries in Halifax.

The silver-plated copper 50-cent coin and .999 fine silver $10 coin were both designed by Yves Berube. Three Designs Creative Group designed the oversized 25-cent coin. All of the coins feature the Susanna Blunt effigy of Queen Elizabeth II on the obverse.

The oversized 25-cent coin features a colorful split-screen scene, with a crowd sending the Titanic off on its maiden voyage shown at the bottom below a night scene of the vessel steaming at sea, with waves in the night scene becoming clouds in the daylight scene.

The night scene shows steam rising out of three of Titanic’s funnels, a historically accurate view represented on the other two coins (the fourth funnel was merely cosmetic, and was used for storage, but viewers of the 1997 movie Titanic might not realize that).

The Specimen-finish copper-nickel coin weighs 12.61 grams and measures 35 millimeters in diameter (as compared to the 23.88 millimeters of a circulating 25-cent coin). Its mintage will be produced to demand.

Presented in an illustrative folder, the 25-cent coin retails for $25.95 Canadian.

The fateful iceberg juts out from the lower left of the reverse on the silver-plated copper 50-cent coin. A face-on view of the Titanic, full steam ahead in colorful water just moments before impact, greets the viewer.

The Proof coin weighs 32.82 grams and measures 42 millimeters in diameter. With a limited mintage of 17,000 pieces, the coin is encapsulated and presented in a maroon clamshell case for $34.95 Canadian.

The RCM also marks the Titanic anniversary with a silver $10 coin that depicts another view of the vessel moments before it struck the iceberg. The ship joins a map and coordinates of the sinking on the reverse.

Also encapsulated and presented in a maroon clamshell case, the coin retails for $64.95.

All of the reverses of the three coins bear the denominational inscriptions, the date and name of the luxury liner.

The Perth Mint replicates famous contemporary poster art promoting the Titanic on the reverse of its coin, shown in full color.

A tugboat in the foreground is tethered to (and towered over by) the Titanic, and another tugboat appears in the background. The poster was part of a massive publicity campaign as the Titanic made waves with transoceanic passengers, courting their business.

Aleysha Howarth is credited as the designer of the coin.

The obverse bears the date, denomination and issuing country’s name, among the inscriptions.

The commemorative coin weighs 31.135 grams, measures 40.6 millimeters in diameter and has a mintage limit of 5,000 pieces.

It retails for $107 Australian.

Prices are reported in the currency of issue, and the actual price paid in U.S. dollars if purchasing directly from the mints.

Talisman is also an official distributor for the Perth Mint, and it offers the coin for $99.95. ¦

Editor's note: An earlier version of this article incorrectly identified the designer of the oversized 25-cent coin.