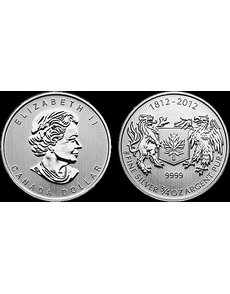 Two new bullion coins marking the bicentennial of the War of 1812, including the silver $1 shown, are being struck by the Royal Canadian Mint but are available through only one distributor. 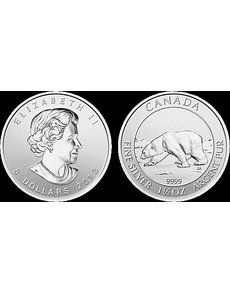 Canada’s latest silver bullion coin is the Polar Bear 1.5-ounce .9999 fine silver $8 coin, released in October but available in the United States only through Lear Capital.

The Royal Canadian Mint has released three new bullion coins, but collectors will be hard-pressed to learn about them from that Mint.

The release of these coins illustrates the partnerships between private companies or individuals and world mints in the modern world coin market.

The RCM has released special issues in conjunction with third-party distributors before — a series of privy-marked silver and gold maple leafs is perhaps the most recognizable result from those partnerships.

The latest offerings, however, include unorthodox sizes never before seen on Canadian coins. Additionally, distributors are establishing minimum quantity purchases not normally in place for standard RCM bullion sales.

Alex Reeves, the RCM’s senior manager of communications, said the 1.5-ounce and three-quarter ounce silver coins were produced “to add variety to the Mint’s silver bullion coin offering, through unique weights not found on collector coins, as well as eye-catching designs which make them interesting acquisitions for both first-time precious metals buyers and long-term investors.”

Though distributors are using the term Uncirculated to describe the finish of all three coins, the RCM said all were issued through its bullion department and feature a bullion finish.

The silver coins were released in late September and early October, and the gold coin was released in April.

Unlike the RCM’s traditional bullion coins, these specialized products are being sold at sometimes significant premiums.

Lear Capital is the exclusive distributor for the Polar Bear $8 coin, which shows a lone polar bear ambling across the scene with legends surrounding. The designer is not identified, but the $8 coin, as well as the War of 1812 coins, feature the Susanna Blunt effigy of Queen Elizabeth II on the obverse, which was first used for gold Maple Leafs in 2004.

The $8 coin is available only in rolls of 15 coins (for 22.5 ounces of silver per roll). Based on responses to multiple inquiries from the author, customers contacting the firm with questions about the coin are quoted a price representing a 30 percent premium over the precious metal or “spot” price of the silver in the coin.

The Polar Bear coin will be “produced to demand,” according to Reeves. Canadian dealer Gatewest Coins obtained the license to sell the coins in Canada only, and offers the coins at about the same premium in effect for Lear Capital’s sales to U.S. buyers.

The two War of 1812 coins are exclusively available through Goldline International.

Both coins carry a similar reverse design by Cathy Bursey-Sabourin, using allegorical symbols of American and British forces flanking a maple leaf decorated shield. The design was used earlier in 2012 on a Proof example of the quarter-ounce .9999 fine gold $10 coin.

The silver dollars are being offered only in 30-count rolls, at approximate premiums of more than 50 percent, based on responses to inquiries through the company’s public telephone contact.

According to Goldline representatives contacted through the public telephone number, both War of 1812 coins have a limited production window of one year, but no specified mintage limit.

The RCM did not require new blanks for the quarter-ounce gold 1812 coin, but the three-quarter ounce silver dollar required a new size of blanks. ¦