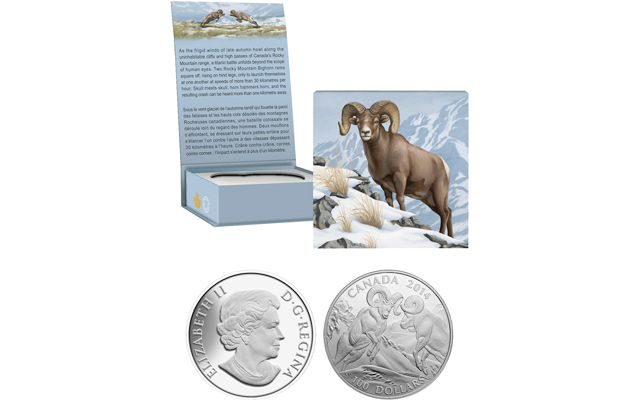 The powerful Rocky Mountain bighorn sheep is one of Canada’s most distinctive and identifiable wild sheep species.

The reverse of the new $100 coin, designed by Canadian artist Claudio D’Angelo, features a pair of the clashing titans on a wind-swept crag.

“As the frigid winds of late autumn howl along the uninhabitable cliffs and high passes of Canada’s Rocky Mountain range, a titanic battle unfolds beyond the scope of human eyes. Two Rocky Mountain Bighorn rams square off, rising on hind legs, only to launch themselves at one another at speeds of more than 30 [kilometers] per hour. Skull meets skull, horn hammers horn, and the resulting crash can be heard one [kilometer] away,” according to the RCM.

The coin has a mintage limit of 50,000 pieces, the same as all three previous issues in the series.

The Rocky Mountain Bighorn Sheep coins are available from the Royal Canadian Mint to collectors in Canada and the United States at face value, plus shipping costs, with a limit of three coins per household.

The U.S. prices for collectors in the United States buying directly from the RCM fluctuate with the exchange rate, calculated at the time of purchase.

Distributors Gatewest Coin Ltd. and Talisman Coins stock the coin, and have established their own rates. Gatewest prices the coin at $99.95 in U.S. funds and has an order limit of 20 pieces. Talisman offers the coin for $109.95 U.S., with purchases of five or more including a $5 per coin discount.

To contact Gatewest inside the United States, telephone the firm at 888-565-2646 or visit it online.