RCM goes to beach, under the sea, with new coins 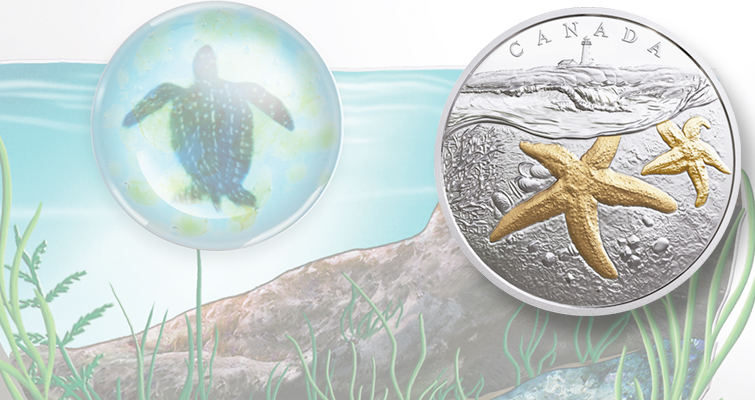 A pair of new Proof silver coins from the Royal Canadian Mint are a reminder of the simple joys of an ocean-side vacation. 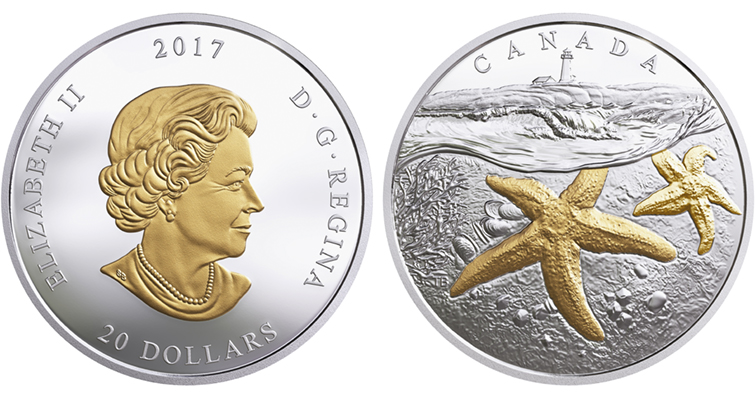 The first coin in the From Sea to Sea to Sea series shows the Atlantic starfish, highlighted with selective gold plating. 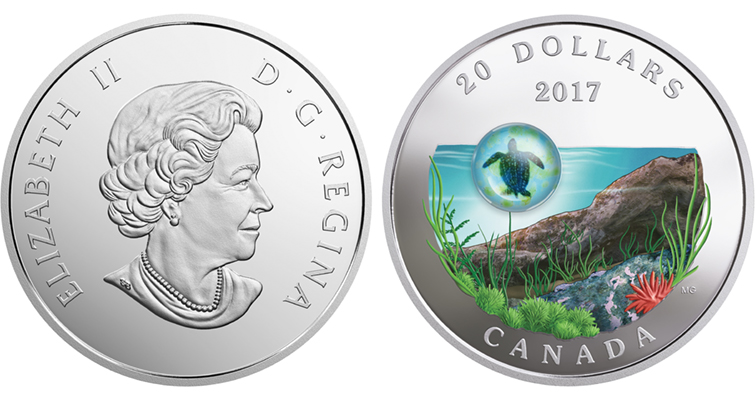 A sea turtle graces the reverse of a Proof silver $20 coin from Canada, in a handmade embellishment made from murini, a glass element. Placement of the element differs from coin to coin.

A pair of new Proof silver coins from the Royal Canadian Mint are a reminder of the simple joys of a beach vacation.

Issued Sept. 5, just as the unofficial end to summer arrived, these Proof 2017 .9999 fine silver $20 coins showcase a day at the ocean’s edge, celebrating the Atlantic starfish and the sea turtle.

The starfish coin marks the beginning of the From Sea to Sea to Sea series, while the turtle coin is the third and final issue in the Under the Sea series.

Designed by Canadian artist Tony Bianco, the reverse of the Atlantic starfish coin presents a unique glimpse of Atlantic Canada’s coastal waters. Beneath the engraved word CANADA stands a lighthouse on the rocky shoreline, where the sentinel was often the first sign of land to many travelling by sea.

A crashing wave infuses the reverse with a sense of sweeping motion, transitioning to a calm underwater realm, where outstanding amounts of engraved detail recreate an ocean floor lined with shells, sand and sea grasses.

Selectively applied gold plating draws the eye to two starfish, while providing an enhanced view of their defining characteristics. Against the silver background, the gold plating truly shines as it highlights the rough, spiny appearance of these five-armed ocean-dwellers and adds a sense of texture and dimension to the idyllic aquatic setting.

A different enhancement than gold-plating makes the sea turtle stand out on its coin.

The reverse design by Canadian artist Maurice Gervais also peers into the underwater world off Canada’s coast, where color applied over detailed engraving highlights the coral, ferns and rocks that lie beneath the gentle waves.

On the left, a handcrafted embellishment by Canadian glass artist Loïc Beaumont-Tremblay contains a sea turtle-shaped mosaic murini (or murrini) element unique to each coin.

The mosaic-based approach to this glass art technique lends itself well to recreating the turtle’s distinctive appearance, from its shell to its clawed feet and tail. Positioned to mimic the turtle’s movements through the water, the murini piece is itself enclosed in its own glass “shell” sculptured from borosilicate glass.

Both coins depict the Susanna Blunt effigy of Queen Elizabeth II on the obverse.

Both coins weigh 31.38 grams, measure 38 millimeters in diameter and have a mintage limit of 7,500 pieces each.

The RCM issued the starfish coin at an issue price of $112.95 Canadian, and the sea turtle coin was released at $151.95 Canadian. 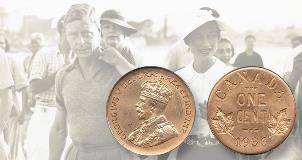 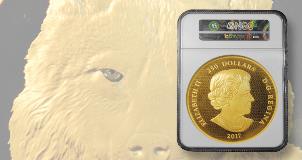 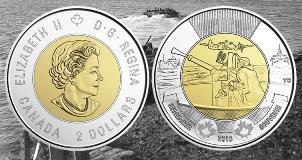