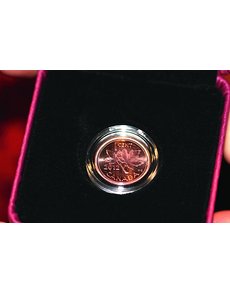 Image by RyAnne Scott, courtesy of the American Numismatic Association.

For one of the latest donations to the American Numismatic Association’s Edward C. Rochette Money Museum, it wasn’t so much the size of the donation but its importance that registers with ANA officials.

Though only “worth” one cent, the Royal Canadian Mint’s donation to the ANA was anything but average — the coin is one of the final “approximately” 50 Canadian 1-cent coins struck. Dated 2012, the coin was struck on May 4 during a ceremony attended by Canadian Minister of Finance James Flaherty and RCM President and CEO Ian E. Bennett.

The donation was made during the RCM’s world mint stage presentation Aug. 9 during the ANA World’s Fair of Money in Philadelphia.

James B. Love, chair of the RCM Board of Directors, made the presentation of the cent to ANA. He said the donation was made because both the ANA and the RCM “have mutual interests in advancing the science of numismatics.”

During the presentation, Love identified the example donated to the ANA as the second-to-last struck piece; however, video of the event (and RCM Director of Communications Christine Aquino) confirmed that only the final cent was segregated. Love also said the blanks received special preparation, but according to Aquino, regular 1-cent blanks were used in striking the coins.

A total of 1 million examples of the 2012 cents were struck for use in collector products, but Aquino said RCM officials aren’t prepared to make an announcement at this point. “One will be made in the near future,” she said.

Love said most of the 50 final strikes are still available for presentation to dignitaries both inside and outside the Ministry of Finance and the Royal Canadian Mint, and that decisions about who will receive an example have not yet been made.

The donation to the ANA was accepted by ANA President Thomas Hallenbeck and Executive Director Jeff Shevlin. Shevlin, after the show, said: “The American Numismatic Association is thrilled that the Royal Canadian Mint has made such a generous donation to our museum. We proudly accept it and plan on exhibiting the cent in our museum.”

According to the ANA Library and Communications Director RyAnne Scott, the ANA plans to display the donated coin, along with a video about its creation, at the ANA museum in Colorado Springs, Colo. While ANA officials have not yet set a date for the exhibit to open, a current estimate is that it will debut sometime in September, she said.

Before the announcement, the 1-cent coin comprised some 50 percent of production at the Winnipeg Mint, but the cessation of production of the denomination won’t affect RCM workers.

“We’ve already gotten enough foreign orders in from Asian countries to take their place,” Love said, “so there will be no layoffs — in fact, we’re hiring people to do the foreign work that came in.” ¦