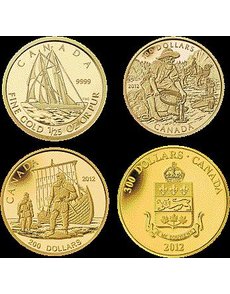 Canada celebrates the famed Bluenose schooner, top left, the Cariboo (British Columbia) Gold Rush of 1862, top right, Viking explorers, lower left, and the coat of arms of Quebec, lower right, on new Proof gold coins. The Bluenose 50-cent coin and the Viking $200 coins are composed of .9999 fine gold, while the $100 Cariboo and $300 Quebec coins are made from an alloy of 58.33 percent gold and 41.67 percent silver.

Change is the watchword when describing the Royal Canadian Mint’s first launch of gold collector coins during calendar year 2012.

The annual Proof 50-cent, $100, $200 and $300 coins offer a change in precious metal fineness, mintage or price, with some coins experiencing more than one change compared to issues in similar series from 2011. All four denominations were released Jan. 23.

Leading the release is the .9999 fine gold 50-cent coin, which borrows a beloved design from Canadian numismatics, the celebrated Canadian schooner Bluenose.

Winner of many International Fisherman’s Trophy series of yachting races since its launch in 1921, the original Bluenose was lost off Haiti in 1946 after a distinguished racing and commercial career. The ship was revived when the Bluenose II was launched in 1963.

The Bluenose has graced Canada’s 10-cent circulation coin since 1937. A different design of the ship, derived from original artwork by late Nova Scotia artist Philip MacReady, which was based upon a 1921 photograph, is used for the reverse of the 2012 coin. The design was approved by the Bluenose II Society and was developed in collaboration with the Maritime Museum of the Atlantic.

The obverse of this and all the other 2012 gold coins in the Jan. 23 release features the Susanna Blunt effigy of Queen Elizabeth II.

The year 2012 is the 150th anniversary of the rush to Cariboo Gold Fields in 1862, a critical event in British Columbia’s history.

The RCM’s annual .5833 fine gold, .4167 fine silver gold coin features a Tony Bianco design recalling the days when tales of “rivers of gold” by four men returning from the creeks of the Cariboo region triggered a gold rush from as far south as California in 1861.

The wild and inaccessible territory required the building of a hugely expensive and dangerous wagon road through massive mountains, and across deadly canyons and glacial rivers, according to the RCM. This challenge inspired a little-known side-story of that celebrated event.

Hearing that camels had been successfully used for long distance transport in Texas, Arizona and California, an enterprising merchant named Frank Laumeister thought these animals would solve the big logistical challenge of reaching the Cariboo gold fields. These animals were not built for the treacherous mountain terrain of the Fraser Valley and the experiment of “Laumeister’s Camels” came to a swift end.

A miner rests on a rock in the foreground, with another miner working a sluice box in the middle ground. A third miner rides one of the camels in the near background, with the scenic vista of British Columbia behind.

This is the lowest mintage limit for coins in this annual series.

The 2012 coin honors the Vikings, Canada’s first European explorers and settlers, opening the Great Explorers of Canada theme, a new one for the overall series.

While the exploits of legendary Norseman Leif Erickson are well documented, credit for the first European sighting of Canadian land goes to a seafaring merchant named Bjarni Herjulfsson, who in 986 ventured off course between Iceland and Greenland, according to the RCM. His story of a great forested shore inspired Erickson to set out on his successful quest for Vinland 15 years later, which brought him to the coast of modern-day Newfoundland.

The legacy of the Vikings in Canada, preserved at the UNESCO World Heritage Site of L’Anse aux Meadows at the northwest tip of Newfoundland, is now immortalized on the coin in a design from artist Yves Bérubé.

The reverse of the coin shows a pair of Vikings standing on the shores of a new world, with their trusty knarr merchant ship anchored in the background.

The coin weighs 15.43 grams, down from the previous 16-gram weight of other issues, but the increase in fineness means the coin has more gold — 15.43 grams versus 15.67 grams in previous issues. The size remains 29 millimeters in diameter.

The RCM is in the process of honoring the coats of arms of each of its provinces, issuing .5833 fine gold, .4167 fine silver $300 coins for two provinces per year, and the first 2012 coin celebrates the Province of Quebec.

First granted by Queen Victoria in 1868, Quebec’s coat of arms was revised in 1939 by the provincial government to more accurately reflect the province’s history and heraldic symbols.

A shield composed of three horizontal fields represents its founding influences: three fleurs-de-lys at the top for its French roots, the lion in the middle for Great Britain and the three maple leaves at the bottom to represent Canada. Beneath the shield is the motto JE ME SOUVIENS, which calls on all Quebecers to honor and preserve their history.

The coin weighs 60 grams, measures 50 millimeters in diameter and has a mintage limit of 500 pieces, unchanged from the two 2011 examples.