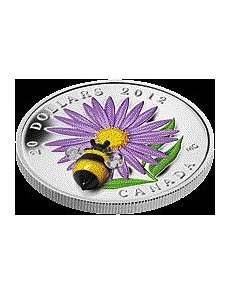 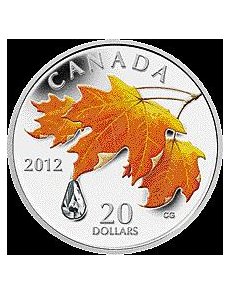 A Proof silver $20 coin is the fifth in a series of colorful coins featuring a Swarovski crystal as part of the reverse design of a colorful maple leaf. 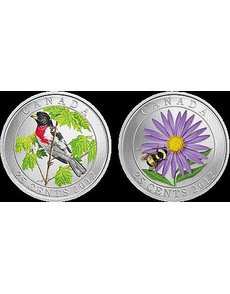 The Royal Canadian Mint’s latest product launch includes oversized colorful Specimen finish 25-cent coins celebrating the birds and the bees (the rose-breasted grosbeak and a bumble bee), as well as an aster. 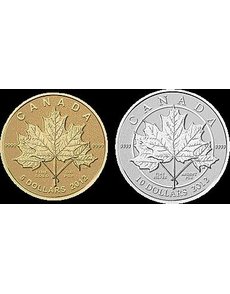 “The birds and the bees” is more than the topic of an uncomfortable talk with your children — it might be one way to label the latest outpouring of collector coins from the Royal Canadian Mint.

In the Royal Canadian Mint’s April 16 release, the third launch for the RCM in calendar year 2012, the narrow focus of themes touches on the season, spring, offering collectors coins featuring a bird, bee, flower, and lots and lots and lots of maple leaves.

The ninth release in the popular series depicting Birds of Canada honors the rose-breasted grosbeak (Pheucticus ludovicianus), which winters in central Mexico and northern South America before returning to the heavily wooded second-growth deciduous and mixed forests spread from British Columbia to Nova Scotia.

The reverse of the Specimen-finish copper-nickel coin shows a bright-chested male rose-breasted grosbeak perched delicately on the stem of a maple tree, in a scene actually struck on the coin (unlike some earlier issues, which appear as color applied to a smooth surface). Arnold Nogy designed the reverse.

A colorful aster and bumble bee design is shared (though with some differences in detail) by another oversized Specimen copper-nickel 25-cent coin and companion Proof .9999 fine silver $20 coin. The two coins together compose the second issues in an annual series honoring colorful flowers and their “friends,” according to the RCM.

The reverses of the two coins, designed by Maurice Gervais, show a bee, or as the RCM describes it, “nature’s canny cultivator,” engaged in pollination with a purple aster.

The Proof $20 coin with the same theme is adorned with a handcrafted glass bumble bee from Murano, Italy, by artist Giuliano Donaggio; the glass bee has a different appearance than the die-struck bee on the 25-cent coin. The $20 coin weighs 31.39 grams, measures 38 millimeters in diameter and has a mintage limit of 10,000 pieces.

The $20 coin had an original issue price of $139.95 but the mintage quickly sold out (though the RCM website lists the coin as delayed shipping until May 18); distributor Talisman Coins has the coin on the secondary market for $229.95.

Canadians are inextricably linked to the maple leaf, and the latest batch of coins is decidedly weighted to honor the deciduous doyenne of the north.

A Proof Maple Leaf Crystal Raindrop .9999 fine silver $20 coin is the fifth in a series of colorful coins adding a crystal element to the maple leaf on the reverse design. A Swarovski crystal “drips” from the tip of the auburn leaf (an admittedly fall color choice) in a design by Celia Godkin.

Also launched are five different versions of a Maple Leaf Forever design by illustrator Luc Normandin, showing three different maple leaves stacked, their stalks touching. Certain specifications and legend details appear in different locations on the coins, depending on the version, but the design of three leaves is a constant.

Normandin’s design appears on a Specimen .9999 fine gold $5 coin, the first in a planned series of small gold coins featuring Canada’s iconic emblem, according to the RCM.

Prices are listed in Canadian funds. The U.S. prices for collectors in the United States buying directly from the RCM will fluctuate with the exchange rate, calculated at the time of purchase.