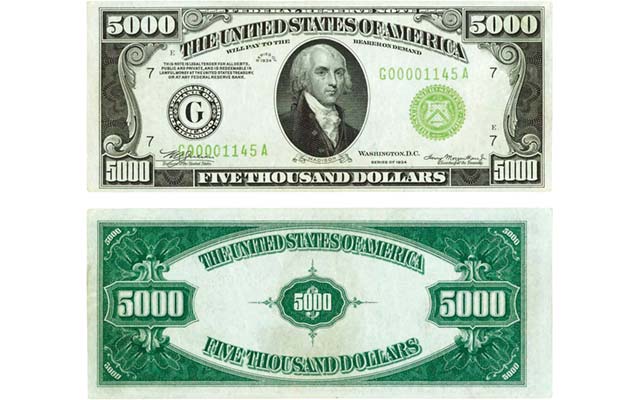 Only 30 of the 109 lots offered at the “Rarities Auction” conducted by Stack’s Bowers Galleries and Sotheby’s on May 20 were U.S. paper money, and the auction continued the recent emphasis on small-size high-denomination notes. These, thanks to the dispersal of a large holding, have been appearing for sale lately in a proportion that far exceeds what should be expected.

Topping them all in the auction, at $164,500, was a lot sold to an Internet bidder, a Paper Money Guaranty Choice Uncirculated 64 $5,000 Federal Reserve note from the St. Louis district (Friedberg 2221-H ). Government records show that 2,400 of the notes were printed for the district, the same number as for the Richmond, Kansas City, and Dallas districts. In comparison, a different example of the note graded PMG Choice Extremely Fine 45 Net was sold by Heritage for $94,000 on April 24 at the Central States Numismatic show. Also at CSNS, a Chicago District $5,000 Federal Reserve note (F-2221-G) graded PMG Choice Uncirculated 64, but with the “EPQ” designation for “Exceptional Paper Quality” given, coincidentally also brought $164,500. (All prices given include the 17.5 percent buyer’s fee.) The results at the two different auctions show pricing apparently consistent across the market.

Interesting in terms of quantity as well as quality, were two high-denomination lots with notes bearing sequential serial numbers. One lot was a quarter pack, or 25 examples, of $500 Chicago notes (F-2202-G) graded from Choice Uncirculated 64 to Gem Uncirculated 65 by PMG that realized just under $73,500.

A group of seven similar $1,000 Chicago notes (F-2212-G) went for $35,250. Both results were not much different than the expected combined results if the notes were offered individually.