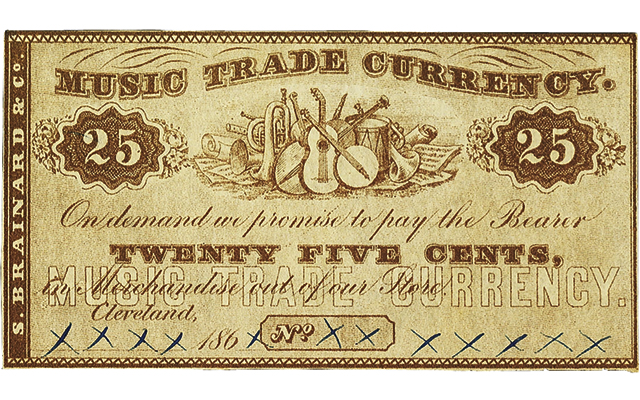 This remainder note from the mid-1800s for a musical publishing company in Cleveland, Ohio, is one of three known. It was sold at auction for $763.75

Often a piece of paper money almost speaks as you page through an auction catalog. You cannot help but want to know the story behind it.

A case in point is the uniface 25-cent “music trade currency” piece illustrated here. The piece, formerly part of the Wendell Wolka Collection of Ohio obsolete notes, recently sold for $763.75 (just below the estimate of $800 to $1,000). The note was sold by Heritage Auctions April 28 during the internet-only auction held in conjunction with the Central States Numismatic Society convention in Schaumburg, Ill.

The piece, graded Uncirculated by Heritage, is a remainder note, meaning it was an unissued note left over after its issuer stopped issuing the pieces.

In addition to a beautiful vignette showing half a dozen musical instruments, text on the note promised the bearer that it could be used toward a purchase in the store in Cleveland, Ohio.

An ink pen was use to place X’s along the bottom of the piece where the date and serial number would be hand-printed, preventing the unissued note from being used.

The note was produced for S. Brainard & Co., a Cleveland music publishing business owned by Silas Brainard, according to Wolka’s A History of Nineteenth Century Ohio Obsolete Bank Notes and Scrip.

By 1889 Charles had moved the company to Chicago, while Henry remained in Cleveland.