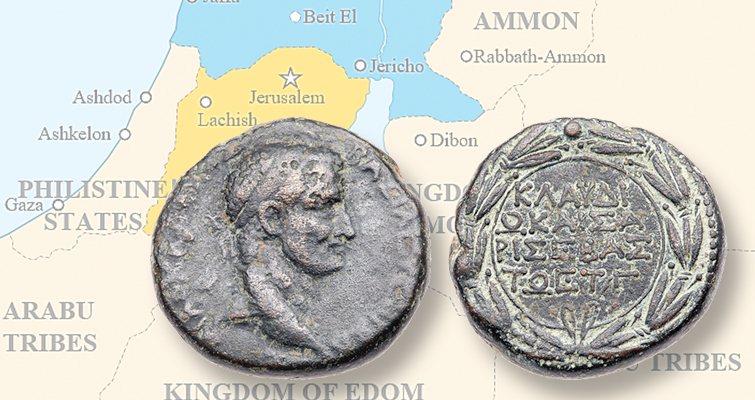 A rare Judaean bronze coin is among many highlights of Ira & Larry Goldberg Auctioneers’ Pre-Long Beach auction June 12 and 13.

The circa 43 to 44 A.D. bronze coin (classified as AE 25 for its composition and size, in millimeters) is “one of the most important rarities in the Judaean series,” according to the auction firm.

The coin was issued during the Herodian Kingdom by Herod of Chalcis, who appears on the obverse of the coin, wearing a diadem (jeweled crown).

In A.D. 41 the Judaean King Herod Agrippa petitioned the emperor Claudius to appoint his younger brother, also named Herod, king of Chalcis, in Coele-Syria. Claudius granted the request, and because of his kingship, this Herod is familiarly known as Herod of Chalcis, the firm said.

“The fact that a Herodian was appointed king in a non-Jewish land well north of Judaea shows the depth of support that Claudius offered this family,” according to the Goldberg firm. “The Herodians showed their gratitude in many ways, including with coin designs intended to flatter their imperial benefactor.”

On this rare bronze, the portrait of Herod of Chalcis is accompanied by an inscription that describes him as a “friend of Claudius” or as “one with whom Claudius is friendly.” Similarly, the reverse inscription “for Claudius Caesar Augustus” is dedicated to the emperor in Rome; the date at the end of the inscription, translating to year three, indicates it was struck in A.D. 43 or 44.

The Judaean bronze coin weighs 15.72 grams, about a half-ounce, and displays a dark brown patina with some greenish highlights, according to the catalog description. 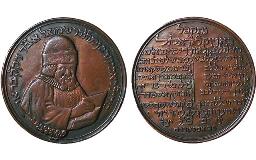 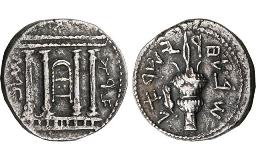