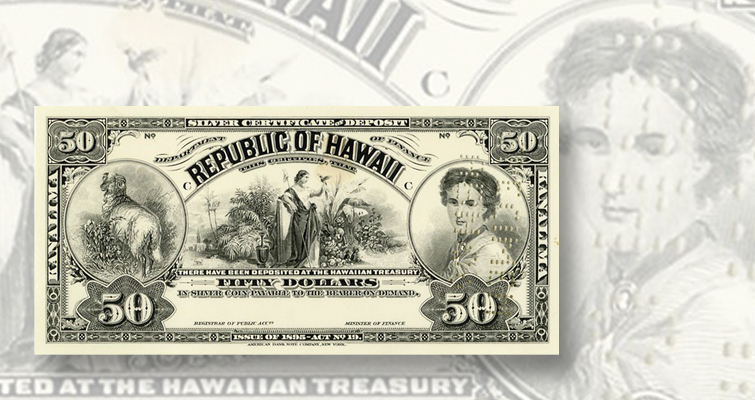 Archives International Auctions will offer 600 lots of world and United States material in its June 15 auction, including this possibly unique uniface proprietary proof of a Series 1895 Republic of Hawaii $50 silver certificate of deposit.

As is customary with the firm, the sale is heavy with Chinese material and nonfederal United States material. The latter category in this sale includes items from the American Bank Note Company archives, stock certificates, and what the auctioneer calls “ephemera.”

Perhaps the premier American-related item, with a starting bid of $900, is a uniface Series 1895 Republic of Hawaii $50 silver certificate of deposit (reprinted 1960–1980s) graded Choice Uncirculated 63 by Paper Money Guaranty. It is called a “proprietary proof,” printed in black on a thin card cut down to banknote size. The face has a young woman at right, ram at left and a tropical rendition of Liberty in the middle under the title. The back is blank. It is pin-punched “SPECIMEN ABN Co.” at right. Called an extremely rare bank note in any format, only one proof is listed in the PMG census and no proprietary proofs are listed at all. It is possibly unique in this format.

For eye appeal, if not value, AIA is featuring a 500-franc note from the Tahiti Institut D’Emission D’Outre-Mer in 1970 overprinted REPUBLIQUE FRANÇAISE, that, in “Superb Gem Uncirculated 68” is at the top of the 16 in the PMG census. It features a sailboat along the island’s shore and a large bust of a young native worker. Bidding starts at $150.

A large format Shanghai, China, 1905 $100 specimen note from the American Bank Note Company and graded Gem Uncirculated 65 by PMG is estimated at $7,000 to $15,000. Blue on both face and back, it is dominated by a screaming eagle on top of two globes at left and ornate multicolored lathework in the center. SPECIMEN and 00000 serial numbers are overprinted in red.

Close behind in price and expected to rival the Shanghai note for collector attention is another specimen note produced by American Bank Note Company. This one was for the Chinese-American Bank of Commerce, Harbin branch, in 1920. Although issued as a specimen, it has a serial number. New York Harbor’s Statue of Liberty is in a spiked circular frame at right, with four purple Chinese overprints and SPECIMEN overprinted diagonally in the middle. It is graded PMG Very Fine 30. 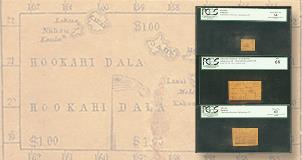 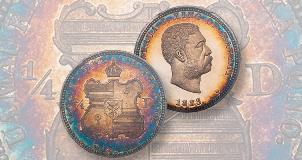 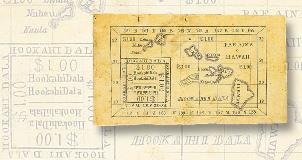