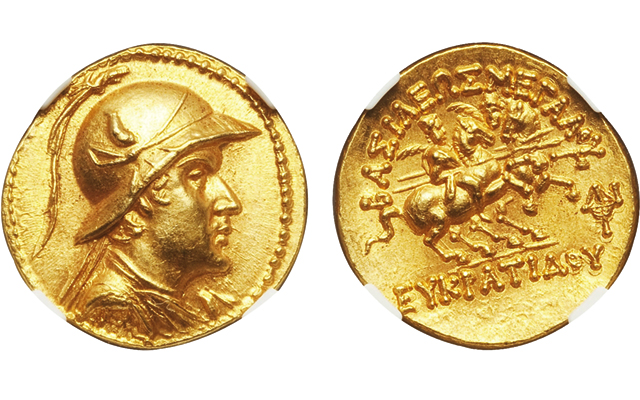 One of fewer than 20 gold coins known from Eucratides I, “the Great,” this circa 171 to 145 B.C. gold stater highlights the Lexington Collection of Jonathan Kern.

Rare gold stater of Eucratides I

The Greek world extended as far away as the Indian subcontinent, thanks to the conquests of Alexander the Great, who established a Greek presence there that remained for centuries.

What is now Afghanistan and northern India broke from Seleucid rule. Various kings subsequently arose to govern the loosely defined area known as the Graeco-Bactrian kingdom.

The rulers appear on their own coins in a series of portraits “of astonishing power and realism,” according to the auction house.

One of those is the circa 171 to 145 B.C. gold stater of Eucratides I, “the Great,” whose “vast realm was larger than any other Greek-ruled kingdom of the time,” the auction house said.

One of fewer than 20 gold coins of the king extant, the coin shows Eucratides as a general wearing a broad-brimmed helmet, resembling a modern explorer in a pith helmet.

The coin is graded Gem Mint State, Fine Style by NGC, which also ranks the strike and surface as 5/5.