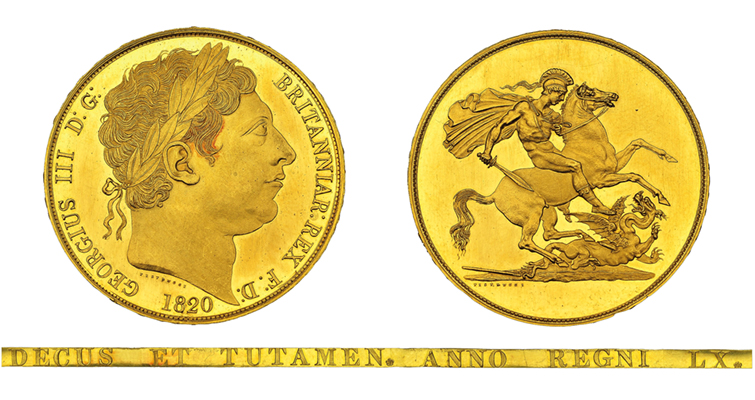 Just 25 of the coins are believed to have been minted, some of which were given to museums and institutions, while others went to some of the most influential figures of the time. The magnificent coins — the last [until Queen Elizabeth II, as Victoria had only the 1839 £5 gold coin, very early in her reign] to bear the head of a monarch who had been on the British throne for 60 years — rarely appear on the market. This example is being sold by a lady collector.

“This coin is something very special,” said Christopher Webb, head of the coins department at Dix Noonan Webb. “It is a wonderful example of the coin engraver’s art. But it also marks the end of the reign of George III which had seen the loss of the American colonies, the French Revolution, the rise and fall of Napoleon and the birth of the Industrial Revolution. Here beauty combines with history.”

This pattern coin — one produced to evaluate a proposed design but not approved for general release — emerged from the relationship between William Wellesley Pole, Master of the Mint from 1814 to 1823, and the Italian Benedetto Pistrucci, his leading engraver, who came to England in 1815.

Thomas Wyon junior, the chief engraver at the Mint, died in 1817 but Pistrucci was barred from formally taking over the post because he was a foreigner. Pole got around this rule by leaving the job nominally vacant, paying Pistrucci £500 a year and giving him the use of the chief engraver’s official residence at the Mint. It was an arrangement that caused some resentment.

No large gold coins had been issued for circulation in England since 1754, before George III had come to the throne, and in December 1819, perhaps realizing that the king’s health was rapidly declining, Pole instructed Pistrucci to prepare dies.

Although workmen at the Royal Mint labored through the night to finish them in time, the dies were not completed when George III died at Windsor at 8:38 p.m. on Jan. 29, 1820.

With the king dead, the gold coins could not be minted for general circulation. Instead, a small number — thought to be 25 although there may have been 26 — were struck, effectively as posthumous commemorative pieces. Six went to institutions such as the Royal Mint, the Bank of England and the British Museum, while eight were given to Royal Mint officials.

The remainder were acquired by influential figures such as the Marquis of Salisbury, and coin collectors such as the south London brewer Robert Barclay and the museum curator Edward Hawkins. Whether the Marquis of Salisbury received one specimen or two is uncertain — hence the debate over whether there are 25 or 26 — but it is more probably the former. Whatever the figure, the 1820 pattern £5 gold coin remains one of the rarest British coins.