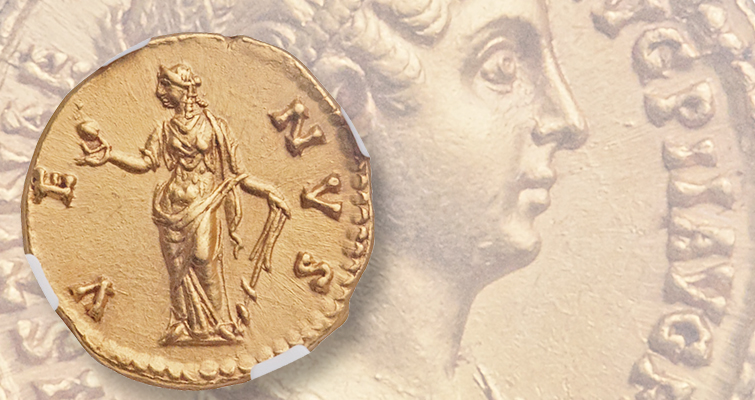 This high-relief gold aureus of Faustina Junior realized $25,850 at the Denver ANA auctions. Faustina appears on the obverse with Venus appearing on the reverse. 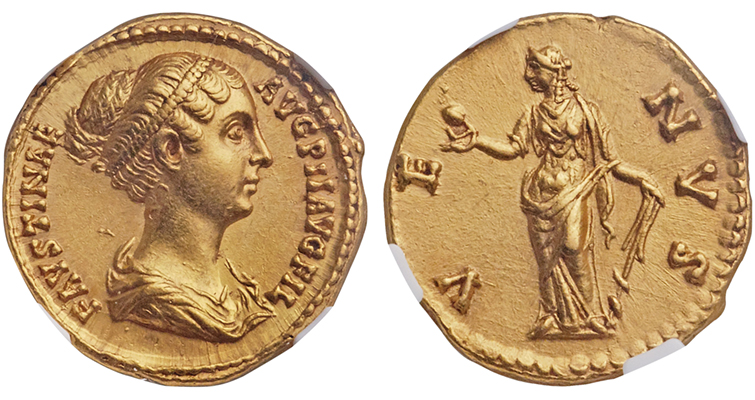 The reverse depicts a standing Venus wearing drapery that both reveals and conceals her curvy figure, facing the viewer, her head turned left, holding an apple in her right hand.

Steve rarely writes about the world coins, so this group of coins must be a real treat if he decided to cover it. Here’s the second of these Roman gold coins:

While Roman coins depicting men formed the majority of the collection, some strong and beautiful women were also represented, including Faustina Junior, daughter of Antoninus Pius and wife of Marcus Aurelius.

A sensitive gold aureus struck in Rome featuring an expressive portrait of the roughly 20-year-old princess, with her elegant hair waved and rolled in a double bun coiled at the back and wound through with a band of pearls and held in place with a hair band, sold for $25,850.

It was graded Choice About Uncirculated by NGC with both surfaces and strike graded 5/5, with an NGC ? designation and Fine Style notation, recognizing the high relief die work and detailed engraving. The reverse depicts a standing Venus wearing drapery that both reveals and conceals her curvy figure, facing the viewer, her head turned left, holding an apple in her right hand and a ship’s tiller entwined by a dolphin in her left. When this coin was struck in 149 to 152, the younger Faustina had just been named empress by the Senate to honor her father. 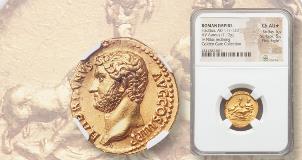