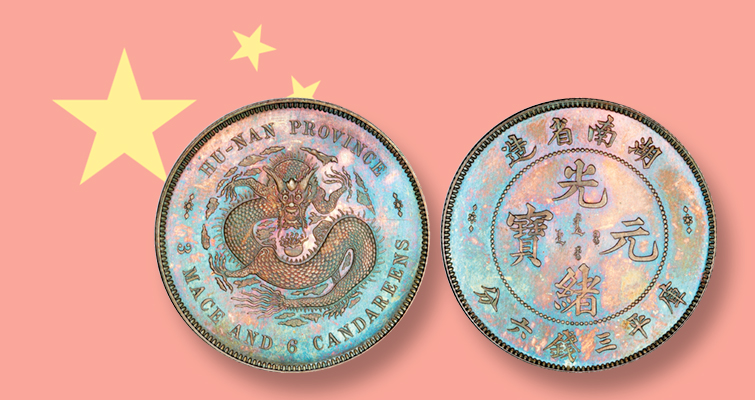 The star of the auction was the finest known 1897 silver 50-cent pattern from Hunan. This coin was struck at the Heaton Mint and is from the famed Irving Goodman Collection.

This establishes a new record for a Chinese half dollar, according to Champion Auction owner Michael Chou, just as the coin did when it sold in the 1991 Goodman Collection sale for $8,500, $1,500 less than estimate.

Three collectors native to Taiwan bid on the coin, according to Chou, two based in Taiwan and one based in the United States.

The coin is one of two graded by PCGS, the other rated Specimen 63 and sold by Champion in 2009.

Six examples of this rarity are known, according to the auction house, citing research in the Heaton Mint archives by Richard Wright in the 1970s.

Four of the six coins are now in collections in Taiwan, and the whereabouts of one example is unknown. “No examples are in any Chinese museums or collections in mainland China,” the auction house said.

The circumstances allowing the existence of these coins are murky. Earliest minting records for Hunan omit these coins, which pre-date the official opening of the provincial mint in 1901, but there are also 10- and 20-cent coins dated 1898 and 1899.

“Why then would Hunan purchase a foreign style coinage plant, which would require the presence of foreign workmen to set it up and a foreign supervisor to keep in running?” the auction house asks.

A news article from 1897, recently discovered, suggests that the Canton Mint sent workers to Hunan to establish the mint there. The Heaton Mint was enlisted to create dies for this mint, but neither the dies nor the coins ever made it to China, according to Wright’s research, because of a change in provincial government.

In the 1970s, the sale of the Heaton Mint archives helped propel these coins into the marketplace, and Wright’s research helps answer questions (but poses many others) regarding their curious nature.

Many lots in the sale established record prices for their type, according to Chou, but one lot soared to double-digit multiples of its presale estimate.

This medal was part of the Chinese Family Collection, the same consignor as for the 1897 50-cent pattern leading the auction.

The medal was struck at the Central Mint in Tientsin and depicts a goat on the obverse and a rising sun above the sea on the reverse. 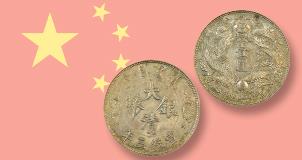 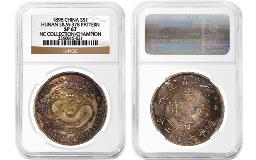 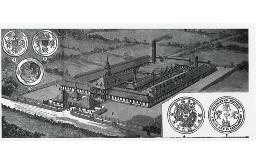