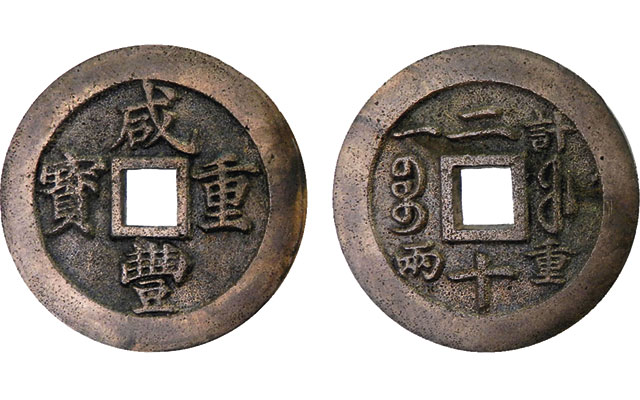 The market for historic Chinese coins is gaining strength, if the result for a rare Chinese coin in a recent Stephen Album Rare Coins auction are any indication.

Joe Lang, CEO of the firm, told Coin World that the coin — a circa 1853 to 1855 bronze 20-cash coin that has an inscription translated as “calculated weight one ounce” — drew interest from at least 12 bidders, some of whom traveled from China to bid on the coin.

The coin, issued under Ch’ing (Qing) dynasty ruler Xian Feng, was struck at the Fuzhou Mint in Fujian Province. It was the star of the Nicholas Rhodes Collections of Chinese cash and Islamic coins. The single coin realized $49,200, including a 20 percent buyer’s fee, against an estimate of $550 to $650.

Lang said that, in his 30+ years in the hobby, he had never previously handled an example of this rare coin.

The coin “has a really good provenance and is very rare and very high in quality, which is a perfect storm these days for Chinese buyers. The Chinese market is going crazy now with anything super rare and high quality,” Lang said. “I’m still very surprised it went as high as it did — even knowing all that I know about the market.”