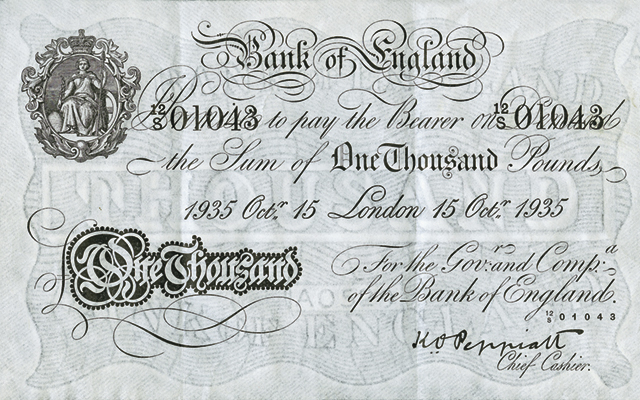 Only about two dozen 1935 £1,000 notes are thought to still survive after they were withdrawn due to a Nazi plot during World War II. This example was sold at auction Sept. 29 by Dix Noonan Webb in London.

The notes were withdrawn from circulation during World War II because of a Nazi plot to flood Britain with forged paper currency. Only about two dozen of the original, genuine £1,000 notes survive.

The £1,000 note was the highest denomination ever issued by the Bank of England.

Its demise was prompted by Operation Bernhard, the German plan to destabilize the British economy by flooding the country with counterfeit notes during World War II. The original plan was to parachute the counterfeit money into Britain, but it was found more practical to use the notes to pay German agents operating throughout Europe.

When the £1,000 notes were withdrawn from circulation and destroyed, just 63 remained unaccounted for, and today about two dozen are thought to exist. The example auctioned at Dix Noonan Webb was consigned by a British private collector.

In addition, a rare £10 million Bank of England Treasury bill in the same auction sold for £17,000.

It was the first time that a Treasury bill with such a huge face value had come onto the collector market, according to the auction firm.

The last bills were produced in September 2003, including the one auctioned, which was given to a leaving government official as a retirement present after the bill was stamped “CANCELLED,” according to the firm.

For more information about the auction, visit the firm’s website or email the firm.