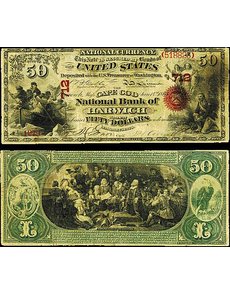 An Original Series $50 national bank note that has spent the last 27 years “in the dark” will be offered at auction Oct. 16 and 17 in Missouri.

The note, issued by the Cape Cod National Bank of Harwich (Massachusetts), has been in a “dark” safety deposit box in a Missouri bank since the consignor bought it, according to Dave and Cheryl Weaver of Weaver’s Signature Coin & Currency Auctions LLC in Easton, Mo.

When the note’s consignor went to work on a fall day in October 1985 at the First National Bank of St. Joseph (Missouri), she had no clue that the Federal Deposit Insurance Corp. would come that day to take over the bank and ultimately close it, according to the Weavers.

The failed bank’s assets and building were sold by the FDIC and a large auction was held to sell other assets from the failed bank. It was at the auction that the consignor purchased the $50 national bank note to be offered in the firm’s upcoming auction.

The note will be offered at auction online by Weaver’s through Proxibid. A 10 percent buyer’s fee will be added to the winning bid.

The Cape Cod National Bank was chartered in 1865 and liquidated on July 31, 1920, according to Don Bailey’s National Bank Notes. Original Charter notes were issued from 1863 to 1882.

The note, issued almost 150 years ago, bears the facsimile signatures of Register of the Treasury Stoddard B. Colby and Treasurer of the United States France E. Spinner. It bears charter number 712.

The note is graded Very Fine 20 by Paper Money Guaranty. The PMG sticker also indicates that the note has pinholes.

PMG records indicate this note is the highest grade Original Series $50 note for this bank with only one other note, grading Good 6, having been graded by PMG.

According to the Weavers, the note has strong signatures; deep color ink with no stains, fading or bleed-through; and no tears, heavy creases or repairs.

For more information about the note and the auction contact Weaver’s Signature Coin & Currency Auctions LLC, Box 131, Easton, MO 64443. Email the firm at weavercoin@yahoo.com or telephone the business at 816-253-9182.

More information can also be found at the firm’s website, www.weavercoinauction.com. ¦