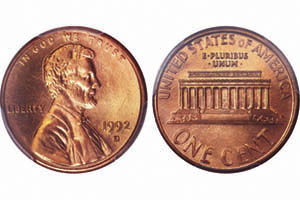 Over the past few years, collectors have shown heightened awareness of the two different reverse types seen on some years of Lincoln, Memorial cents from 1992 to 2000.

In 1992 at both the Philadelphia and Denver Mints, two distinct reverse types were used: one where the A and M in AMERICA are close together, and the reverse designer Frank Gasparro’s initials FG are far from the Lincoln Memorial, and another where A and M are more distantly separated and the initials are closer.

The close AM subtype is much scarcer on 1992-D cents, and Heritage estimates that around 15 examples of the rare reverse type are currently known, although more may be discovered over time. Graded MS-65 red by Professional Coin Grading Service, this sold for $14,100 at Heritage’s Feb. 27, 2014, auction.