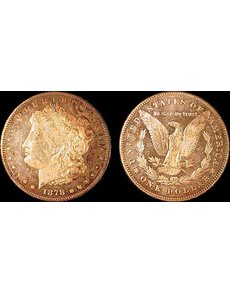 This image of an 1878 Morgan dollar, an example of poor photography in auctions, makes it difficult to ascertain whether it is “Deep Mirror Prooflike.”

I’m using that year because I won such a coin (depicted here) in an online auction where photos are less than ideal.

When I received the coin, I was impressed by its reflective fields. For a Morgan dollar to be DMPL, Professional Coin Grading Service requires clear, undistorted reflections on both sides of the coin from at least 6 inches away.

I purchased the coin that at first glance appeared to grade MS-64, for $130. But it had a deep contact mark on the cheek that didn’t come through in the online photo. That was apt to bring down the value considerably.

Why don’t grading services designate similar coins that may be unworthy of a grade as “1878 7/8 TF Genuine Unc. DMPL”?

Hall replied, “No DMPL on Genuine’s” and DeFelice agreed. The DMPL designation is reserved for Uncirculated coins with original surfaces, he said.

“Problem coins have the most significant imperfections and are for the most part either damaged or altered. These coins meet the lowest standards for uncirculated grades,” DeFelice said.

NGC, which uses the abbreviation DPL rather than DMPL, would not logically apply that descriptor to all surface conditions.

“Coins that are polished, cleaned, artificially toned or lacquered may appear deeply prooflike when in fact they are not or have been altered to appear so,” Schechter said. He added if NGC were to assign such a characteristic, “we could only do it in a constrained way — akin to making special exceptions for a very small number of coins.”