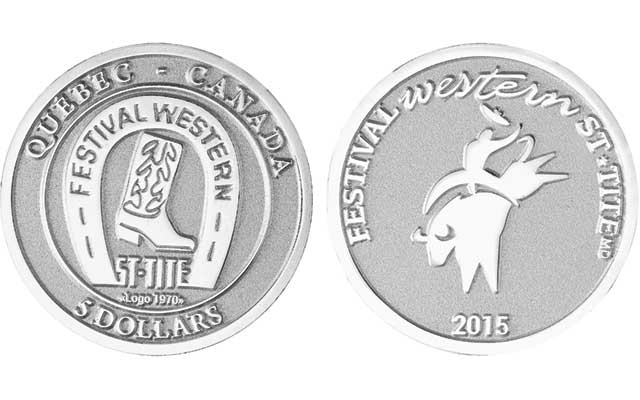 The Royal Canadian Mint struck a $5 trade token being issued for a 2015 rodeo in Quebec.

A rodeo and western gathering in Quebec, Canada, has issued its first collectible trade token.

The token (called a coin by organizers) was struck by the Royal Canadian Mint.

The multi-ply, nickel-plated steel token celebrates the Festival Western de St. Tite, a rodeo, country music and western show now in its 48th year. The event originally began to showcase the region’s leather goods, and is now the largest western attraction in Eastern Canada, according to event organizers.

RELATED: See what Canadian rodeo has a commemorative coin for 2015

The token weighs 16.4 grams and measures 30 millimeters in diameter.

The obverse features the initial festival logo, a boot surrounded by a horseshoe, which was created in 1970 and used from 1971 through 1974. The nation, province and denomination also appear.

The reverse depicts the current logo, a stylized bull and rider (waving a hat), with the festival name and date completing the scene.

According to Pascal Lafreniere, the festival’s general manager, this is the first event in Quebec to issue a “souvenir coin” struck by the RCM.

Single examples are available for $6 each (Canadian) and examples in the luxury set (containing facts and images from the festival’s history) are $10.

Shipping for the tokens costs $12 Canadian.

Orders may be placed online at the festival website.