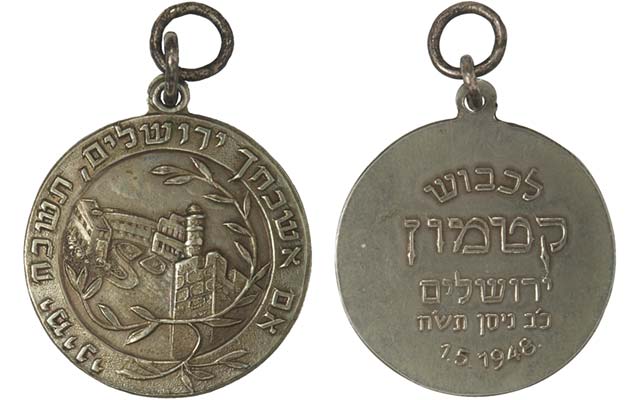 The obverse of the silver Qatamon medal illustrated depicts the Citadel of David and the building of the Jewish Agency, bombed by the Arabs’ chief explosives expert.

Qatamon (also spelled Katamon) is a wealthy neighborhood in southwest Jerusalem, which until early 1948 was home to many families of Palestinian Arab notables. Located far to the west of the predominantly Arab districts when fighting broke out in 1948, Qatamon was perceived as a major threat by Haganah leader Yitzhak Sadeh. Haganah became the major Jewish armed force in the coming War for Independence.

Qatamon was lightly guarded by Arab fighters, some privately hired to protect wealthy residents. In January 1948, Haganah spies watched three top Arab leaders including Abd el-Kader al-Husseini scouting the Hotel Semiramis as a possible headquarters. Believing they had actually chosen this building, Haganah operatives blew up the hotel, killing most of the Abousouan family and a Spanish diplomat, though the Palestinian leaders were elsewhere.

Fighting in Jerusalem erupted in April 1948, before the proclamation of the State of Israel. Qatamon was commanded by a skilled, if illiterate, fighter from Hebron, Ibrahim Abou Dayieh, with a band of Iraqi volunteers.

Qatamon was the first major Jewish victory in its sector. Elazar had the Qatamon Medal struck in May 1948, before independence, and it was presented July 18, 1949, after independence was achieved.

The Qatamon Medal was struck by the Jerusalem firm of S. Kretchmer and is listed as MM-20 in Jewish Tokens and Medals by Sylvia Haffner and Nathan Sobel. It was struck in 28.78-millimeter silver with integral loop.

The obverse presents the Citadel of David and the building of the Jewish Agency, bombed by the Arabs’ chief explosives expert Fawzi al-Kutub. The legend proclaims in Hebrew, “If I forget thee, O Jerusalem, let my right hand be forgotten.”

The number struck is unknown, but is decidedly scarce today. It deserves better recognition.

Israel’s founders were generally opposed to medals and it was not until 1970 that a full schedule of awards was adopted.