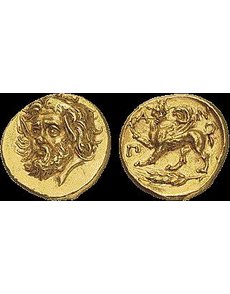 A rare gold stater of Pantikapaion, struck circa 350 to 300 B.C. for the wealthy city, highlights the Prospero Collection, one of the finest ancient coin collections in decades.

In a collection filled with numerous “finest known” and “unique” pieces, the circa 350 to 300 B.C. gold stater of Pantikapaion, a city on the Black Sea in ancient Greece, is perhaps the highlight.

The facing head Pantikapaion gold stater is regarded as “one of the greatest masterpieces of ancient coinage and is among the most spectacular numismatic objects to survive from the classical world,” according to the New York Sale auction consortium selling the coin.

The Greek colony, founded in the seventh century B.C., by the fourth century had amassed considerable wealth through its exports of grain, alluded to on the reverse design upon which a griffin stands. The obverse depicts a satyr with disheveled hair.

It is one of dozens of highlights from the Prospero Collection, which was formed over several decades by a collector with a passion for the arts and a taste for “beautiful and famous ancient Greek coins,” according to the sellers.

The Prospero Collection contains 642 coins that together are expected to realize many millions of dollars when sold Jan. 4.

All successful bids are subject to a 15 percent buyer’s fee.

The sale will be broadcast live over the Internet using www.the-saleroom.com.

Greece, Calabria, Tarentum, circa 344 to 338 B.C. gold stater, 8.56 grams, Lot 23, “two small insignificant nicks on the obverse and one on the reverse edge,” Extremely Fine.

Greece, Sicily, Naxos, circa 460 B.C. silver tetradrachm, 16.98 grams, die engraver believed to be the “Aitna Master,” coin is “one of the great classics of the ancient Greek series,” Lot 149, About EF.

Greece, Sicily, Syracuse, circa 466 to 465 B.C. silver decadrachm, end of Deinomenid Tyranny and beginning of the Second Democracy, 42.65 grams, by the Demareteion Master, “one of the most spectacular of fifth century Greek coins,” Lot 163, VF.

Greece, Sicily, Syracuse, circa 466 to 465 B.C. silver tetradrachm, end of Deinomenid Tyranny and beginning of the Second Democracy, 17.09 grams, by the Demareteion Master, Lot 164, “a few pits towards obverse edge, lightly toned,” VF.

Greece, Macedon, Amphipolis, circa 355 to 354 B.C. silver tetradrachm, 14.4 grams, “one of four recorded examples from this obverse die and the only example of this reverse die,” Lot 273, “toned,” VF.

Greece, Attica, Athens, circa 467 to 465 B.C. silver decadrachm, 42.56 grams, “only two other examples known from this pair of dies, of the highest numismatic and historical importance and a magnificent example of ancient art,” Lot 369, “a few light marks, otherwise About Extremely Fine.”

Greece, Kingdom of Syria, Seleucid Kings, Seleukos I Nikator, circa 281 B.C. silver tetradrachm, 16.7 grams, Lot 610, “one of the finest known examples,” About EF.