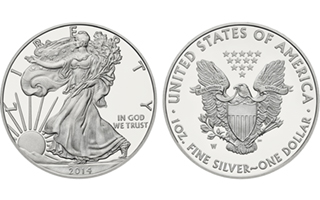 A proposed design change for the reverse of the silver American Eagle will be recommended not only for the bullion issue, but Proof issues as well.

A proposed change in the reverse design to be recommended April 8 for the American Eagle silver dollar includes all finishes.

Members of the Citizens Coinage Advisory Committee are scheduled to discuss possible recommendations during the April 8 telephone meeting. The panel will consider up to a possible maximum of 43 design sketches of eagles that were submitted, but not approved, for previous U.S. Mint coin programs.

"The idea that there is a distinction between the $1 American Eagle Bullion coin and the proof coin in my proposal for a new reverse design is untrue," Marks said by email April 3. "I am unsure how this impression was made. My proposal is for a singular change to the reverse design for the $1 American Eagle bullion coin inclusive of bullion and proof varieties. Do I think collectors as a whole will rebel if the reverse of the $1 American Eagle is changed? No. In fact, if the new design is beautiful and inspirational I believe that, as a whole, it will increase interest and infuse new excitement among collectors for the coin."

The silver American Eagle reverse, designed and sculptured by former U.S. Mint Sculptor-Engraver John Mercanti, has been paired since November 1986, on all versions of the American Eagle silver dollar, with sculptor Adolph A. Weinman's rendition of Liberty that appeared on the Walking Liberty half dollar from 1916 through 1948.