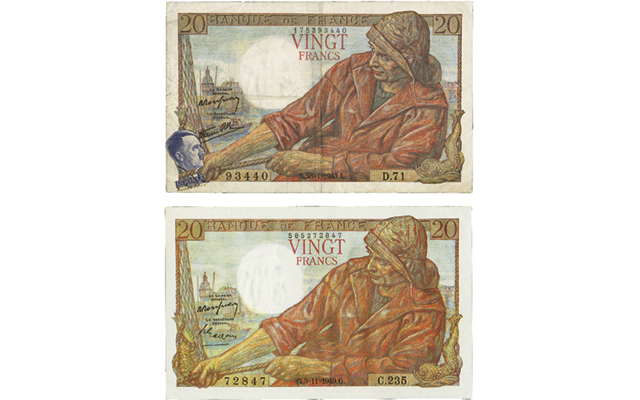 A classic anti-Nazi piece of propaganda from World War II is a French note with a portrait of Hitler cut from a German postage stamped and attached to the French note so as to appear as if the French fisherman is strangling Hitler with the rope. Below is an unaltered French note. 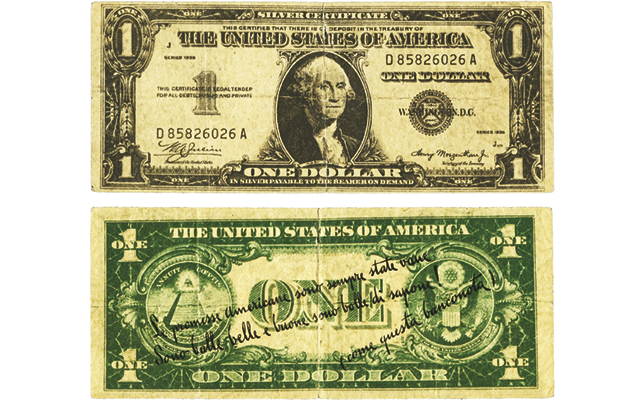 Italy produced a type of propaganda note during World War II that appeared to have a handwritten message across the back of a facsimile U.S. silver certificate. The message tells the finder that Americans make "empty promises, breaking them like soap bubbles." 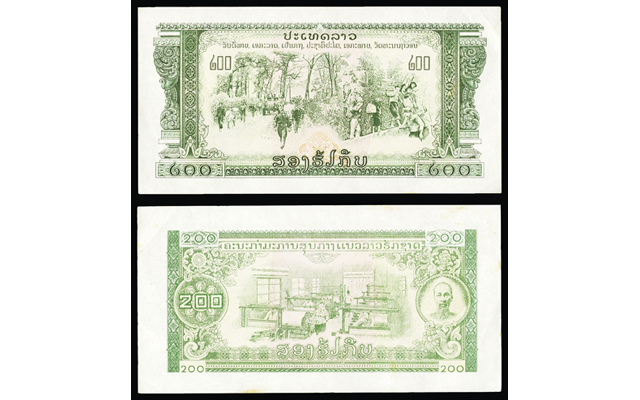 A counterfeit of a 200-kip Lao note mimics the look of notes issued by the communist group Pathet Lao during the 1970s. Instead of a vignette of a temple on the back like the genuine notes have, a portrait of Ho Chi Minh is substituted.

Editor's note: The following is the first of a four-part Coin World series about propaganda notes prepared by Michele Orzano for the July 2014 monthly edition of Coin World.

German troops invaded France on May 10, 1940. It would be more than four long years before France was liberated after Allied troops landed on the beaches of Normandy on June 6, 1944. During the interim, France had a very active underground resistance movement. The resistance used guerilla warfare, provided military intelligence to the Allies and helped Allied personnel escape from behind enemy lines.
Whether whoever altered the illustrated 20-franc note of 1943 was a member of the French resistance or not, the alteration served to send a very clear message to German dictator Adolph Hitler.
The genuine French 200-franc notes depict a French fisherman securing a heavy rope with a knot.
An alteration was accomplished by someone making slits, as a first step, above and below the knot on the rope in the genuine note. A portrait of Hitler was cut from a German postage stamp and pasted into the slits, so as to have it appear the fisherman is strangling Hitler with the rope. The note illustrating this story was sold in a Heritage auction in 2011 for $30.
Italy entered World War II in June 1940. A propaganda campaign using look-alike U.S. paper money soon followed.
One well-known style of propaganda leaflet distributed by Italian armed forces was made to look like a U.S. Series 1935 $1 silver certificate. The back of the “note” appears to have a handwritten phrase in Italian. When translated it says, “The Americans have always made empty promises, breaking them like soap bubbles,” according to World War II Remembered: History in Your Hands – A Numismatic Study by C. Frederick Schwan and Joseph E. Boling.
These pieces were lithographed on thin paper and were said to be produced in Verona, Italy, and distributed in several provinces of northern Italy, according to World War II Remembered. Various other denominations and note types were used to spread messages in Arabic and German.
The note depicted in this story sold in 2013 in a Heritage Auctions sale for $43.
A propaganda note that looks a lot like a 1973 200-kip note from Laos has a curious history.
Pathet Lao, a communist political movement active during the Vietnam War, issued notes after its leaders relieved the Royal Lao government of power.
The designs for the face of the Pathet Lao’s notes showed vignettes of soldiers and the transporting of war materials. The back design featured a view of a textile factory and the That Luang Temple.
Shortly after the original notes were produced, counterfeits started appearing in circulation with a portrait of Ho Chi Minh substituted for the temple vignette on the back.
U.S. Army Sgt. Maj. Herbert A. Friedman, an expert on psychological warfare, indicates the fakes were produced by the Royal Lao government supporters, in an effort to persuade the general population that the Pathet Lao group was fighting for Vietnam and not to better the situation of the Lao people.
According to information on Friedman’s website, www.psywarrior.com, it is possible that the Royal Lao government teamed up with the Central Intelligence Agency to destabilize the communist government in Lao.