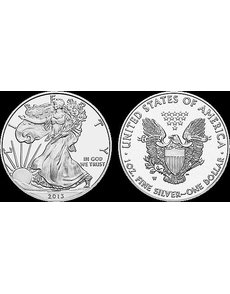 The U.S. Mint plans to offer the regular silver Proof 2013-W American Eagle on Jan. 24. Orders will be taken in the spring for a special two-coin set honoring the West Point Mint that will contain a Reverse Proof and an Uncirculated silver Eagle, each to be available only in the set.

The Proof 2013-W American Eagle silver dollar is scheduled to be offered by the U.S. Mint beginning at noon Eastern Time Jan. 24.

The coin will initially be offered at $62.95, but the price is subject to change, as with all coins struck in precious metals sold by the U.S. Mint.

Later in 2013, the U.S. Mint will offer a special two-coin silver American Eagle set to mark the 75th anniversary of the West Point Mint in New York.

For a Reverse Proof coin, a mirror-like finish is applied to the design elements while the flat fields have a frosted appearance. A traditional Proof coin has frosted elements and a mirror-like background.

Pricing and other information will be available prior to its release.

Orders for both products will be accepted at the bureau’s online catalog, www.usmint.gov/catalog/, and at 800-872-6468. Hearing- and speech-impaired customers with TTY equipment may order at 888-321-6468.

A fee of $4.95 will be added to all domestic orders for shipping and handling. ¦