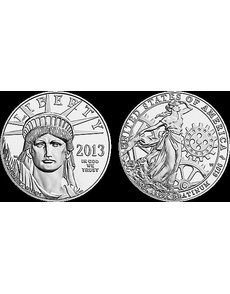 The Proof 2013-W American Eagle platinum $100 coin’s reverse bears a design symbolic of the fifth principle of the Preamble to the U.S. Constitution, “To Promote the General Welfare.”

The fifth of six Proof American Eagle platinum coins featuring reverse designs recognizing the core concepts of American democracy from the Preamble of the U.S. Constitution will go on sale by the U.S. Mint beginning at noon Eastern Time July 18.

The coin has a maximum mintage of 15,000 coins. Pricing for the 1-ounce platinum $100 coin will be based on the bureau’s policy for numismatic products containing gold and platinum. The June 11 afternoon PM fix for platinum on the London market was $1,401 an ounce.

Orders will be limited to five coins per household for the first week of sales. At the end of this period, the Mint will re-evaluate this limit and either extend, adjust, or remove it.

The reverse design of the 2013-W coin is reflective of the fifth principle in the Preamble, “To Promote the General Welfare.”

The reverse was designed by Joel Iskowitz, a master designer with the U.S. Mint’s Artistic Infusion Program. Iskowitz’s design depicts a young America against a backdrop of interlocking gears, symbolizing the interconnection of power between the states and the national government.

The design also includes an American Eagle privy mark from an original “coin punch” identified at the Philadelphia Mint. The privy mark appears in the design within the border at bottom right, between the $100 denomination and AMERICA.

The coin’s obverse, introduced on the platinum American Eagle series in 1997, was designed and sculptured by then U.S. Mint Sculptor-Engraver John Mercanti. It features Lady Liberty, based on the face of the Statue of Liberty.

The Proof American Eagle platinum coins are struck at the West Point Mint in New York and bear the W Mint mark.

The final coin in the series, reflecting the design theme “To Secure the Blessings of Liberty to Ourselves and our Posterity,” will be released in 2014.

Hearing-impaired and speech-impaired customers with TTY equipment may order by calling 888-321-6468.

A shipping and handling charge of $4.95 will be added to all domestic orders. ¦