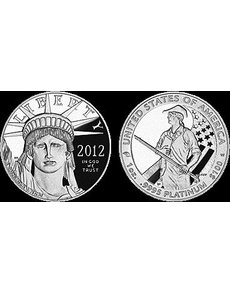 The Proof 2012-W American Eagle platinum coin, composed of one ounce of .9995 fine platinum, is the fourth in a series of six coins featured in the “Preamble Series” program.

The 2012 platinum coin’s reverse design is emblematic of the theme “To Provide for the Common Defence.” According to the Mint, the reverse depicts “a vigilant minuteman from the Revolutionary War, representing the protection and defense of the country during its early days. The minuteman carries a rifle and a book, which symbolizes the importance of knowledge in defending our Nation.”

The reverse design also features an American Eagle privy mark from an original “coin punch” identified at the U.S. Mint at Philadelphia.

The coin, struck at the West Point Mint, bears the W Mint mark of that facility.

The coin’s obverse was designed and sculptured by former Mint Sculptor-Engraver John Mercanti. It features a portrayal of the Statue of Liberty, described as a symbol of vigilance and resolute faithfulness to duty.

The Preamble Series program, first launched in 2009, commemorates the core concepts of American democracy by recognizing the six principles contained within the Preamble to the U.S. Constitution.

The reverse designs are inspired by narratives prepared by the chief justice of the United States at the request of the Mint. Previously released coins issued from 2009 to 2011 feature themes symbolic of “To Form a More Perfect Union,” “To Establish Justice” and “To Insure Domestic Tranquility.”

The themes “To Promote the General Welfare” and “To Secure the Blessings of Liberty to Ourselves and our Posterity” will be featured on the reverse of American Eagle platinum coins in 2013 and 2014, respectively.

Mintage of the 2012 coin is limited to 15,000 pieces. The coin’s price will be based on the Mint’s policy for numismatic products containing precious metals.

Current pricing information can be accessed online at http://catalog.usmint.gov.

Orders will be accepted via the United States Mint website at www.usmint.gov/catalog or by telephone at 800-872-6468.

Orders are limited to five coins per household during the first week of the product’s release. At the end of that week, however, the Mint will reevaluate the five-coin limit and determine whether to extend, adjust or remove the limit. ¦