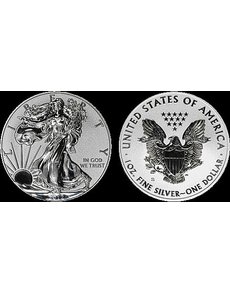 Surprisingly, the U.S. Mint’s recent announcement that it would be producing more Proof 2012-S American Eagle silver coins has not taken the pressure off of the 2012-S San Francisco Two-Coin Anniversary set.

The first Anniversary sets are just starting to reach the market after being shipped on July 27.

These sets — which were originally available for purchase earlier this summer during a 28-day window at $149.95 each — continue to sell at the $220 level on eBay as of Aug. 2.

It’s clear that of the two coins, the market places the higher value on the Reverse Proof 2012-S coin, which is selling at $165.

On July 19 the Mint announced that it would be including additional examples of this issue in another set, which could potentially add another 100,000 examples to the market.

The wholesale market is making major value distinctions based on when the two-coin Anniversary sets will be shipped by the Mint.

Dealers are paying more for sets with shipment dates in late July, rewarding those who purchased their sets during the first few days of ordering. On Aug. 3, one dealer offered to buy sets shipped in July and early August at $200, while paying just $150 for those shipped with the last batch in October.

Such a wide price discrepancy between “in-hand” and future delivery sets shows the uncertainty that even market-making dealers have about the long-term demand for this set.

The Mint’s recent price decrease for Proof 2012-W American Eagle silver coins — dropping $5, to $54.95 — took pressure off of the existing stock of 1986 to 2010 issues and wholesale prices for nearly all Proof issues also dropped by $5. The Mint can raise or lower the price of its bullion products to adjust for the price of gold and silver.

Perhaps collectors will take advantage of the recent price drop and purchase additional examples to nudge sales for the “normal” Proof 2012-W issues well-past the 500,000 mark?

While the silver issues are becoming cheaper, the wholesale price of Proof American Eagle gold coins continues to rise steadily. On Aug. 1, several dealers were paying as much as $140 over the spot price of gold for Proof American Eagle tenth-, quarter- and half-ounce issues with original government packaging. ¦