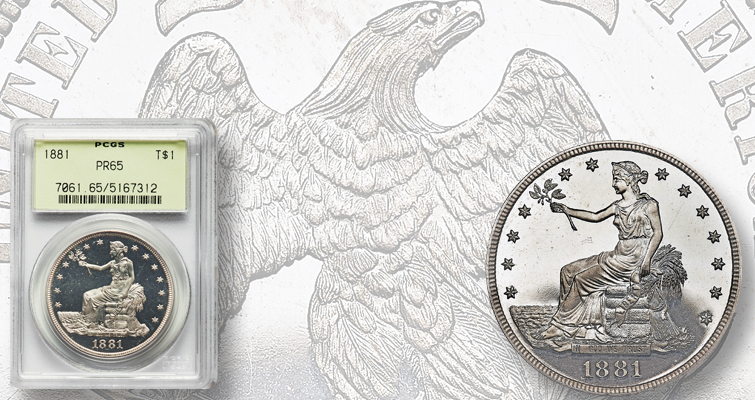 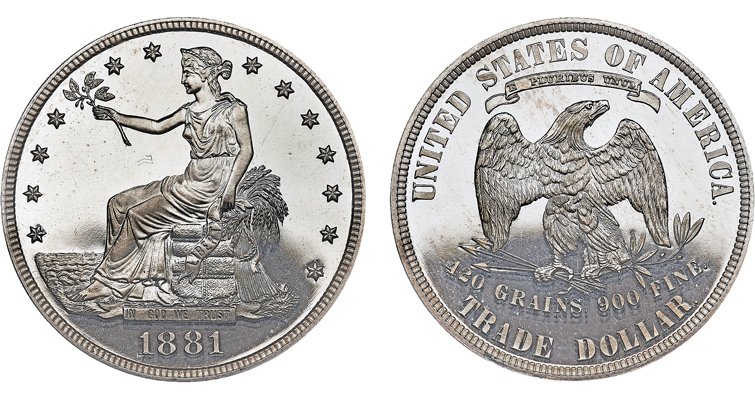 Considering that a typical Proof 65 1881 Trade dollar sells at the $5,500 to $7,500 level, based on recent comparables, someone definitely must have thought this one, with thickly frosted devices and deeply reflective fields, was upgrade material.

It is often tempting to try to determine the motivation of bidders when a coin sells for far more than expected. That’s the case with a stunning Proof 65 1881 Trade dollar with undesignated rich contrast between the fields and devices that brought an unexpected whopping price in Heritage’s recent Long Beach Expo auction.

The 1881 Trade dollar is a Proof-only issue with a mintage of 960 pieces, and examples in even high grades are regularly offered in the marketplace.

This one, graded Proof 65 by Professional Coin Grading Service, is in an old green label holder without a Cameo or Deep Cameo designation. With thickly frosted devices and deeply reflective fields, there is dramatic contrast that suggests it is destined for a Deep or Ultra Cameo holder in the future. An absence of marks and hairlines also suggests that it is destined for a higher grade.

Considering that a typical Proof 65 1881 Trade dollar sells at the $5,500 to $7,500 level, based on recent comparables, someone definitely must have thought this one was upgrade material. For reference, a PCGS Proof 66 Deep Cameo example brought $16,450 at Kagin’s March 2017 American Numismatic Association National Money Show auction.