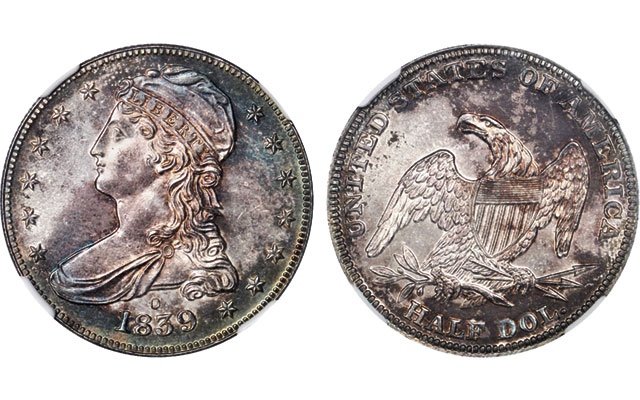 The show will be at the Oregon Convention Center, March 5 to 7.

In the catalog’s introduction, Q. David Bowers writes that the name of Portland is the result of a coin flip of an 1835 Coronet cent: “In the winter of 1844-1845, A.L. Lovejoy and E.W. Pettygrove were the first men to build a log cabin on the original town site of 640 acres. What to name the place? Lovejoy, a native of Massachusetts, wanted to call it Boston. Pettygrove, a native of Maine, wanted to call it Portland. It was decided that the cent be tossed three times, and the best out of three would decide the name. Pettygrove called ‘heads,’ which came up twice. Welcome to Portland!”

The description notes that the piece exhibits qualities not seen on circulation-strike half dollars of the type: “The surfaces shimmer with a satin to semi-reflective finish as the coin rotates under a light, the latter quality most readily evident in the fields. The strike is full with razor sharp definition to the devices and equally crisp delineation between all of the denticles that encircle the border.”

Other examples (all certified by NGC) include pieces graded Proof 64, Proof 63 and Proof 62. Interestingly, all four known examples have appeared at auction since 2008.

Stack’s Bowers adds, “Hidden in the shadow of its much more famous sibling the 1838-O half dollar, the story of this enigmatic early Proof issue is sparse at best and only through recent appearances at auction has more knowledge been gleaned.”

The New Orleans Mint did not make things easy for today’s numismatists researching this issue since it did not keep detailed records on its Proof strikes.