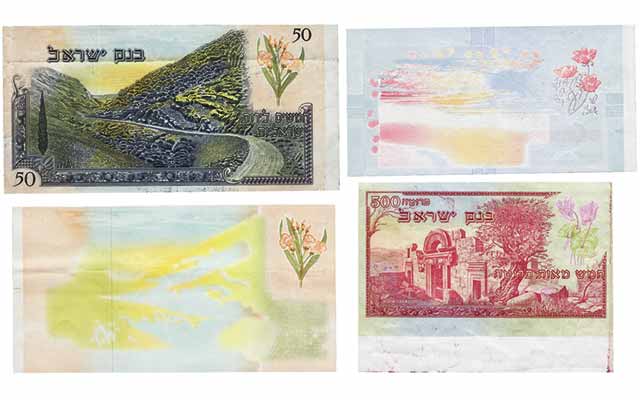 Set of Israeli notes shows the 500-prutah and 1-, 5-, 10-, and 50-pound denominations in different stages of printing. Shown are two stages of the 50-pound note and one each of the 1-pound and 500-prutah notes.

The William M. Rosenblum mail-bid sale of the Philadelphia Collection, closing on July 16, features a selection of seldom-seen Israel paper money assembled by one collector over a period of decades.

Among the most important, with an estimate of $5,000 or above, is a progress set of 23 pieces from 1955. The set shows the 500-prutah and 1-, 5-, 10-, and 50-pound denominations in different stages of the printing process. The 500-prutah and 50-pound notes are each represented by seven notes going from the early stages to the nearly final design. The other denominations are represented by three notes each.

A 1-pound note dated 20 APRIL 1939 of the Palestine Currency Board with mismatched serial numbers is a rare error of which only two are known. The serial number W684821 is at the lower left while at the top right is W68473_ with the round top of the final digit barely visible. It appears that the numbering device got stuck somewhere between 684732 and 684739, leaving a possible population of several dozen notes unaccounted for and no doubt lost forever. Although estimated at $1,500, it is expected by the auction house to bring twice that.

The collection was formed by a businessman from Philadelphia who began buying in 1973 and died in 2012. The catalog may be seen at www.rosenblumcoins.com.