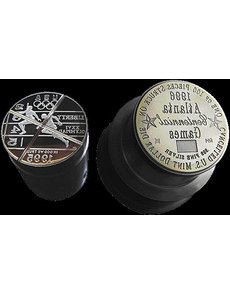 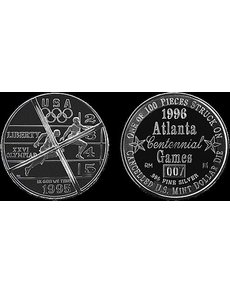 The 38.8-millimeter silver medal is struck on a planchet containing 1 troy ounce of .999 fine silver. 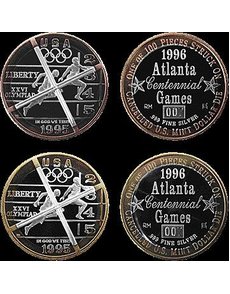 Half-ounce .999 fine silver inserts were used for the ringed-bimetallic medals with a copper or brass outer ring.

The United States Mint sold canceled dies from the Atlanta Olympics program as collector products for $49 each in 1997. The privately issued medals are struck with one of those canceled silver dollar obverse dies and a new, medallic reverse die.

The private mint is offering the medals in three-piece, limited-edition sets.

The medals have a prooflike finish.

Private minter Kelly Finnegan conceived of the medals. Finnegan said Sept. 24 that he has wanted for some time to produce a commemorative medal using one of the 2,833 X-canceled Olympic commemorative coin dies sold by the Mint, but he was only recently able to acquire a suitable example in an eBay auction.

Finnegan was in a strong position to make the idea reality once he had a suitable coin die. He holds connections to two private mints, as owner of the Private Penny Press and as an employee of the Regency Mint.

Finnegan said the press at his Penny Press Mint was not powerful enough to strike a commemorative medal, so he pitched the idea to his employer, Regency Mint, where he works in multiple facets of sales and production.

In addition to striking the medals, Regency Mint is selling the medals through a subsidiary, Quality Silver Bullion. The three-piece medal sets are being offered on eBay under the user name “qualitysilverbullion” and on the QualitySilverBullion.com website.

Medal production has been limited to 100 serially numbered sets, with the serial number appearing on the reverse of each medal.

Finnegan said once sets 2 through 100 are sold, Regency will offer set No. 1 in a package along with the U.S. Mint obverse die and the to-be-canceled Regency Mint reverse die.

Finnegan said he searched to acquire an example of a dollar obverse die so as not to run into any possible problems with the United States Mint by striking medals with a former coin reverse die bearing a denomination.

“There aren’t any legal issues with striking the pieces,” Finnegan said. “The dies were cancelled and sold by the U.S. Mint. They [the medals] are not issued as official U.S. government issues. They do not purport to have a redeemable value in U.S. currency.”

The U.S. Mint die Finnegan obtained on eBay bears the design for the Proof 1995-P Track and Field silver dollar. The die was one of 220 such Proof dies bearing the Track and Field design that the United States Mint offered to collectors from the bureau’s holiday catalog.

The Mint legal staff and Treasury Department officials cleared the way for the sales in 1997. Each die sold was canceled with a deeply incised X-pattern across its face; the defacement was intended to prevent the dies from being used to strike counterfeit coins while at the same retaining most of the design elements.

Some in the numismatic community, especially error coin dealers, opposed the sales of the dies. Some error specialists in the dealer community warned of the possibility of the dies being used to strike counterfeit error coins since significant portions of the designs remained intact on the die faces.

The die offerings included $5 gold half eagle and silver dollar obverse dies, with no half dollar dies included.

Sales of the Track and Field obverse die were second only to sales of the 1995-P Clasped Hands silver dollar; 375 Proof obverse dies were sold with that design.

Finnegan’s U.S. Mint dollar die was placed into service at the Philadelphia Mint on Sept. 15, 1995, and removed after 1,960 strikes because of a die defect known as “starburst.”

“Starburst,” according to U.S. Mint officials, is caused by abrasive particles that accumulate and are carried by the die. During the striking process, the particles score and scratch the die while moving outward from a central point in the direction of the metal flow. These particles and scratches translate to raised areas on the struck coin.

Because the Proof Olympic coins received two strikes per coin, it is likely Finnegan’s coin produced at least 980 coins before retirement because of the starburst problem.

Finnegan said the medals were struck on an Italian-made MDM coinage press striking at a pressure of 600 kilograms per square centimeter.

The silver medals were each struck twice to bring up the relief. The ringed-bimetallic medals each received one strike from the pair of dies, with the silver insert already in place in the outer ring, Finnegan said. Each planchet for all three medals was centered by hand, he said.

The obverse of each medal has a raised X-cancel, imparted by the U.S. Mint die.

The Regency Mint reverse design is inscribed around ONE OF 100 PIECES STRUCK ON CANCELLED U.S. MINT DOLLAR DIE.

Centered in the middle of the reverse is 1996 / ATLANTA / CENTENNIAL / GAMES, flanked by single five-pointed stars. The serial number appears below. Below the serial number is .999 FINE SILVER.

The silver medals are approximately 3.2 millimeters at the rim; the bimetallic medals, 2.4 millimeters.

“I purposely engraved the reverse die to say that the piece contained ‘.999 Fine Silver,’ without mentioning the weight so that the same reverse could be used for all three medals in the set,” Finnegan said. “The weights are listed on the certificates of analysis that come with the medals. Regency makes a 1/2 troy ounce silver bullion medal, so one of those blanks was used for the center. Then copper and brass rings were created to match the thickness of the half-ounce silver planchets used to make the bimetallic medals.

“Being accurate with the silver content in the bimetallic medals was more important than making the thicknesses consistent. The striking force was adjusted accordingly for the medal types,” he said. ¦