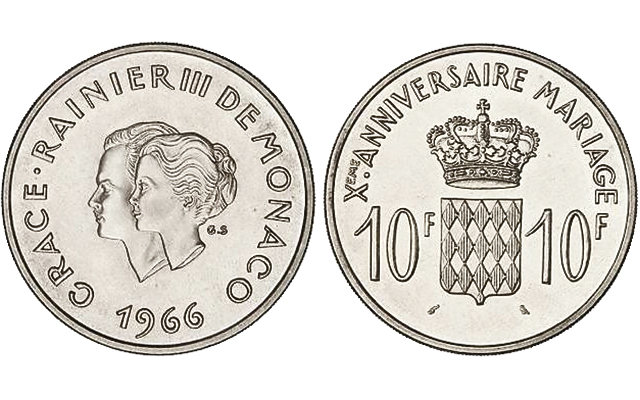 A nickel pattern 10-franc coin from Monaco in 1966 celebrates the 10th wedding anniversary of Prince Ranier III and Princess Grace.

A nickel pattern for a 1966 silver 10-franc coin of Monaco is being sold in a July 10 auction in Barcelona.

The coin celebrates the 10th wedding anniversary of Prince Rainier and Princess Grace. It and a gold 200-franc coin issued at the same time were the first coins to feature the former-actress-turned-royalty.

Many described the former actress Grace Kelly as a fairytale princess when she and Monaco’s Prince Rainier III were married April 18, 1956. They met at the Cannes Film Festival in 1955.

In 1966, Spink & Son of London issued the pair of coins for Monaco and had them struck at the Paris Mint, according to Unusual World Coins by Colin R. Bruce II.

The 10-franc coin (which measures 25 millimeters in diameter) is normally found in .900 fine silver, but the auction features a nickel version test piece, or pattern coin.

The pattern example, struck with a Proof finish, has an opening bid of 90 euros (about $122 in U.S. funds).

The auction is jointly conducted by Soler y Llach and Marti Hervera.