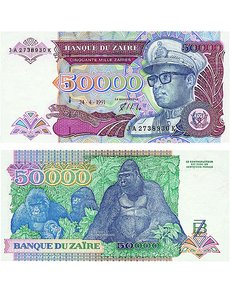 A portrait of dictator Joseph Mobutu Sese Seko appears on the face this 50,000-zaire note of Zaire. He was often depicted in full military garb. Coin World image.

Whether it’s in everyday life or movies and television, villains tend to attract attention.

While fans may choose a favorite bad guy or wicked woman when it comes to actors, the situation is dramatically different for national leaders.

Don’t expect to find thriving fan clubs for Henry VIII, Mussolini or others who ruled with an iron fist. Those villains were universally jeered and scorned once their reigns of terror came to an end.

Fidel Castro has imposed his brand of Marxism on Cuba for nearly 53 years. Unlike what seems a standard feature for tyrants elsewhere, no head-and-shoulder’s portrait of Castro appears on Cuban notes.

Instead, a rear view of Castro speaking to a stadium crowd is shown on the 10-peso notes that entered circulation in 1961. A more full-face depiction can be found on the 1-peso notes issued from 1961 through 1988.

The purple 5-yuan notes feature a mountain scene on the back, while the blue 10-yuan notes display the three gorges on the Yangtze River.

Commemorative 50-yuan notes bearing a different portrait of Mao were issued in 1999 to mark the 50th anniversary of the revolution that placed Mao in power.

All of these notes are priced right for modest budgets, with the 5-, 10- and 20-yuan notes being especially affordable.

Although Joseph Stalin was never depicted on the paper money of the former Soviet Union, portraits of his predecessor Vladimir Lenin were a fixture on notes from 1947 into the 1990s.

Lenin’s portrait first appeared on the 25-ruble notes, which will be of interest to those who like unusual denominations as well as collectors who like their material from the dark side of history.

Russian history buffs and paper money specialists who like completeness can obtain the whole 31-year run for an average cost of less than $5 per note in Crisp Uncirculated, with the exception of the high-denomination pieces from 1991.

Idi Amin’s 1970s reign of carnage, chaos and economic ruin on Uganda rivaled anything imposed by dictators of larger and better-known nations.

The face of the 5-, 10-, 20-, 50- and 100-shilling notes of 1973 all depict the dictator in military garb (Amin rose through the ranks of the British colonial army before Ugandan independence).

Plan on spending $10 for a pair of 5- and a 10-shilling notes in Crisp Uncirculated.

It’s no secret who ran the government in the African nation of Zaire from 1965 to 1997, as a portrait of dictator Joseph Mobutu Sese Seko was constantly depicted on the impoverished nation’s paper currency.

Mobutu is most often depicted in his trademark leopard toque or in full military uniform. Like other African dictators, Mobutu received much of his training, education and advancement through colonial military service. Mobutu’s experience was with the Belgian army.

No collection of dictators on money is complete without Mobutu, and many Zairean notes sell for less than $10. If a type note or two will do, perhaps one note each depicting Mobutu in leopard headgear and one in full uniform would be the way to go.

Muammar Qaddafi (or Gaddafi) would be high on many “most hated” lists, and the Libyan dictator’s 42-year reign recently came to an end. Oil money helped keep Qaddafi in power, and the tyrant can be seen on the face of the 1-Libyan pound note that was first issued in 1988. This note shouldn’t cost more than $5 — and possibly much less, as Libya takes on a new government.

The Ayatollah Khomeini is another totalitarian of recent vintage from the Middle East, and his grim visage was first placed on Iran’s 1,000-, 5,000- and 10,000-rial notes in 1992. The brown and green 1,000-rial note is the way to go on a tight budget, as it should cost somewhere around $5.

Khomeini’s predecessor, Shah Reza Pahlavi, wasn’t in the same league as Khomeini, but the shah was anything but a libertarian when it came to running Iran. His portrait appears on all denominations of Iranian banknotes beginning in the 1940s until he was overthrown in 1979.

The former Iraqi despot Saddam Hussein once ranked high on the dictator charts. His portrait first appeared on Iraq’s notes issued in 1986. Now that he is no longer alive all of the Saddam notes are dirt cheap items for budget-minded collectors. ■