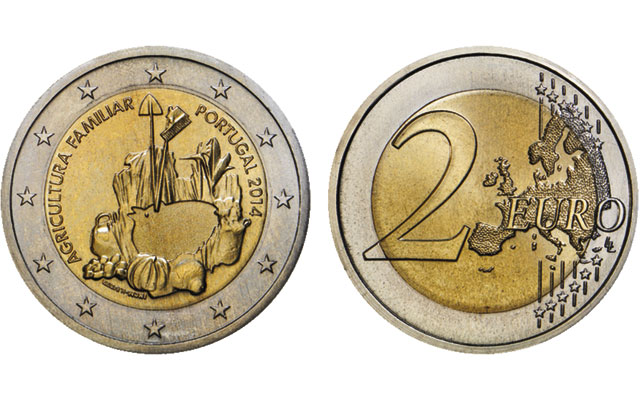 Portugal celebrates the International Year of Family Farming on circulating and collector versions of a 2014 commemorative €2 coin.

A 2014 circulating commemorative €2 coin from Portugal marks the International Year of Family Farming in 2014.

The center ring of the obverse of the coin shows hand tools typically used in traditional agriculture, together with a chicken, surrounded by pumpkins, a basket of potatoes, and other vegetables and flowers. Related legends, the Mint mark and the year date of issue also appear. The obverse was designed by Helder Batista.

In total, 500,000 coins are due to be issued in the latter half of October, in circulation- and collector-quality versions, with most slated for circulation.

From that total mintage, a Brilliant Uncirculated version and Proof version, both issued in collector cards, have mintage limits of 10,000 pieces each.