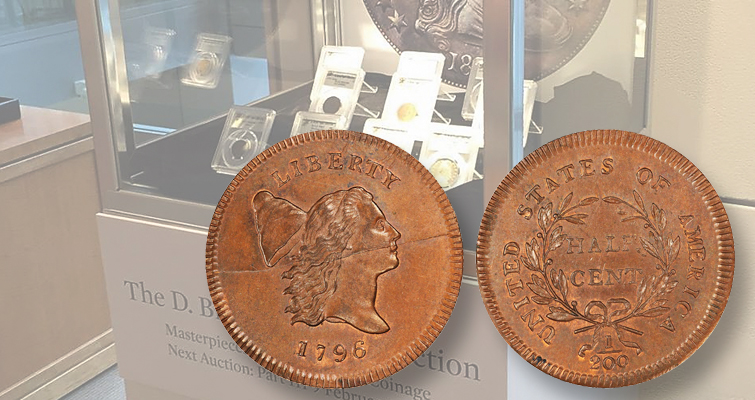 The Pogue Collection’s magnificent 1796 Liberty Cap, No Pole half cent graded MS-67 red and brown sold for $763,750 at the Pogue III auction on Feb. 9 in New York City.

With the third auction featuring coins from the collection of Texas collector D. Brent Pogue bringing more than $17 million on Feb. 9 at Sotheby’s New York City headquarters, we are at the halfway point of this magnificent collection’s return to the marketplace, with two sales to go.

For Pogue III, the average price per lot was $108,453. With this, Stack’s Bowers Galleries noted in a post-sale press release that the Pogue Collection “became the most valuable series of numismatic auctions in history,” surpassing the $62 million in sales netted by the 26 John J. Ford Jr. auctions held between 2003 and 2013.

The finest known 1796 Liberty Cap, No Pole half cent, graded MS-67 red and brown by PCGS, sold for $763,750. Called the Earle-Atwater-Eliasberg example, it was described by Louis E. Eliasberg Sr. as “the finest known specimen of the rarest half cent” and its return to the auction block marked its third public offering since 1912.

Cataloger John Kraljevich added, “The 1796 No Pole is still ‘of excessive rarity,’ perhaps even more so, as few new specimens have been discovered even as the number of collectors who desire one has grown geometrically.”

Another highlight was a half cent generally considered to be the finest 18th century half cent in existence. This 1794 Liberty Cap half cent graded PCGS MS-67 red and brown is of the Cohen 7 variety popularly called the “High Relief Head” and was described as follows: “This legendary coin, discovered less than 40 years ago, is widely acclaimed as the single finest half cent of its era. No other Liberty Cap half cent of any date, not even the much more common 1795 and 1797 issues, has survived looking as much like it did at the moment it was struck.”

The sculptural High Relief variety is considered by many to be the most beautiful, with remarkable relief achieved in Liberty’s hair, especially when compared with other 1794 half cent dies.

The Pogue auctions will continue with the next one scheduled for May 2016. Included in these future sales are the two top lots of the Pogue collection: the finest known 1804 Draped Bust dollar and the only 1822 Capped Bust $5 half eagle not in a museum collection. 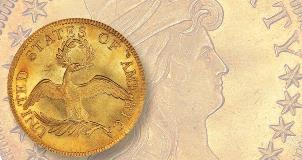 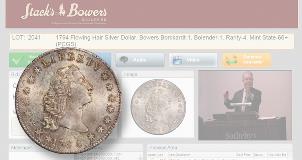