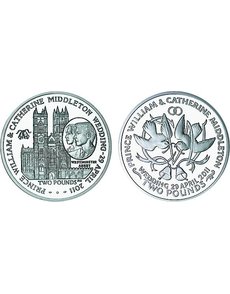 The Pobjoy Mint has issued two different designs on four coins for Ascension Islands. One design, left, shows Westminster Abbey, site of the wedding, while the other bears the initials for the engaged couple’s given names, with doves and bells. 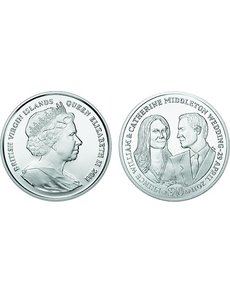 The portrait of the couple on the design from the British Virgin Islands coins was based on a photograph taken during the announcement of their engagement. The private Pobjoy Mint has been at the forefront of world mints in issuing commemorative coins celebrating the royal wedding. 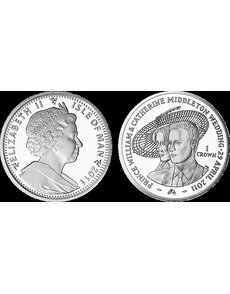 Prince William and Catherine Middleton are dressed for a wedding, but not their own, on the coins from the Isle of Man. The photo that was the basis for this design was taken while they were in attendance at a friend’s wedding in 2010. 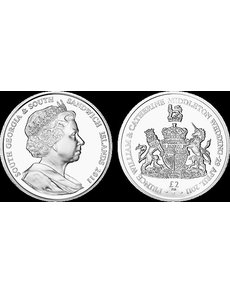 A private minter has been a prolific issuer of commemorative coins marking the April 29 royal wedding of Prince William to Catherine Middleton.

The Pobjoy Mint, in Surrey, England, will issue 15 coins featuring seven different designs, for six issuing authorities from around the world, to commemorate the event.

Recent announcements confirm plans by the Pobjoy Mint for four coins from Ascension Islands and another two for the British Virgin Islands; already reported are two coins for the British Indian Ocean Territory and three coins for the Falkland Islands (Coin World, April 25 and March 21 issues, respectively).

The obverse of each coin depicts the Ian Rank-Broadley effigy of Queen Elizabeth II.

All of the designs are available in both Uncirculated copper-nickel and Proof .925 silver versions, with the Falkland Islands coin also offered in a gold version.

The Pobjoy Mint on April 7 announced it was issuing four new £2 coins for Ascension Island.

The coins feature one of two designs. One design shows Westminster Abbey, where the wedding ceremony is scheduled to take place, and a cameo portrait of the couple, along with two little wedding bells.

The second coin design entwines the initials c and w and shows two doves flying in between them.

At the base of the design, a ribbon carrying two wedding bells is woven between the letters with the wedding date also shown.

On April 14, the Pobjoy Mint announced two coins for the British Virgin Islands.

The design on the British Virgin Islands coins features a portrait of the couple taken during the press conference at St. James’ Palace on the day of the engagement announcement.

It shows Middleton displaying her engagement ring, which is the same ring that Prince Charles used in proposing to Diana, Princess of Wales (William’s mother).

Yet to be announced are coins for the Isle of Man, and South Georgia and South Sandwich Islands.

The 1-crown coin for the Isle of Man shows Prince William and Catherine Middleton in a scene captured when they made an appearance at a friend’s wedding just prior to announcing their own engagement.

The £2 coin from South Georgia and South Sandwich Islands carries Prince William’s coat of arms, which was given him on his 18th birthday in June 2000.

The design is derived from the coat of arms of Queen Elizabeth II. It additionally features sea shells taken from the Spencer coat of arms, used by Diana’s family, to distinguish Prince William’s coat of arms from those of his father, Prince Charles, and his brother, Prince Harry, according to the Pobjoy Mint.

Each of the coins weighs 28.28 grams and measures 38.6 millimeters in diameter.

All of the copper-nickel coins described here have unlimited mintages and cost $15, while the silver versions described here are each limited to a mintage of 10,000 pieces and priced at $84.