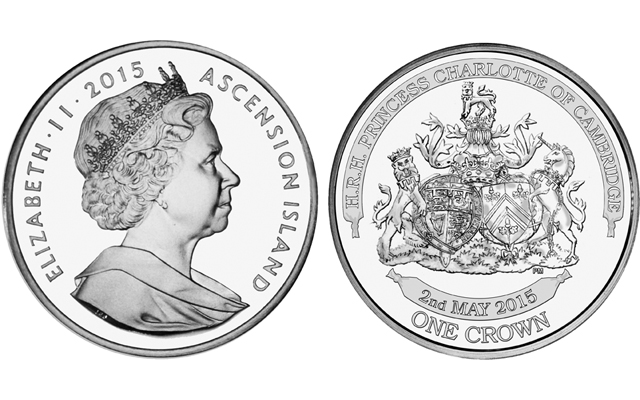 Ascenscion Island has issued commemorative coins through the Pobjoy Mint for the birth of Princess Charlotte of Cambridge. 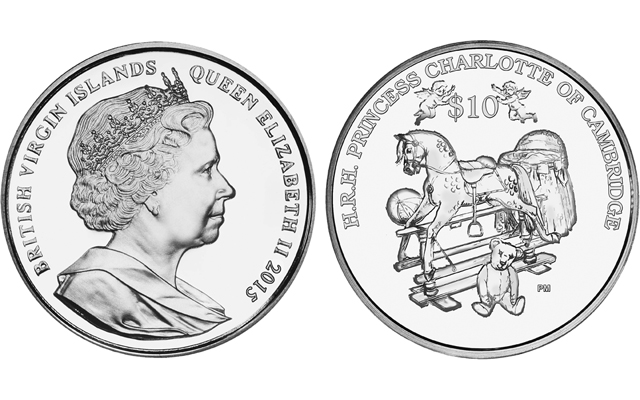 British Virgin Islands has issued commemorative coins through the Pobjoy Mint for the birth of Princess Charlotte of Cambridge.

Shortly after the Duchess of Cambridge gave birth to Charlotte Elizabeth Diana on May 2, 2015, the Pobjoy Mint announced that it would issue coins for two different nations to celebrate the milestone.

Princess Charlotte of Cambridge is fourth in line to the throne and the second child for the Duke and Duchess of Cambridge.

The coins are being issued for the British Virgin Islands and Ascension Islands and were approved by Queen Elizabeth II and the parents.

The design from British Virgin Islands features several images to welcome the birth of a new baby — a rocking horse, a baby’s crib, a teddy bear and a ball. The wording in the surround reads HRH PRINCESS CHARLOTTE OF CAMBRIDGE. Two cherubs are also shown with the face value of the coin.

The Ascension Island tribute carries the royal coats of arms, by tradition the separate shields of a royal husband and wife, side by side.

On the left of the design is the Duke’s version of the Royal Coat of Arms granted to him by the Queen on his 18th birthday. On the right is the Duchess’s shield from the Middleton family coat of arms, granted to the family in 2011 ahead of her marriage. The wording in the surround reads HRH PRINCESS CHARLOTTE OF CAMBRIDGE

The obverse of each coin features an effigy of Queen Elizabeth II by Ian Rank-Broadly.

All of the coins weighs 28.28 grams and measure 38.6 millimeters in diameter.

The Uncirculated coins have unlimited mintage and are priced at $16.95 each, and the silver coins are limited to a 10,000-coin mintage and priced at $89 each.

Want to read about more coins marking the royal princess? Coin World has the stories!